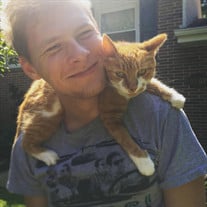 It is with an exceptionally heavy heart that we communicate the passing of Anthony Jean Glusko, 23, on Saturday, February 15, 2020. Anthony was stubborn, indecisive, and a great debater. He was nerd – a real honest to God nerd - one that had a Star Wars tattoo on his back. He loved procrastinating. He spent Sunday nights in high school finishing projects that were due the previous week. And yet, he was loved by everyone that met him. Anthony was exceptional. He was smart, kind, and respectful of whoever he met. He was a vibrant young man with a passion for rocketry. Anthony was very involved in community through Boy Scouts, achieving the highest rank of Eagle Scout. He spent countless hours volunteering and was active in his school community. A band geek and Dungeons-and-Dragons player, Anthony spent weekends building rockets and playing strategy games with his friends. He attained his Bachelors in Mechanical Engineering from Penn State University and was working towards finishing his masters in Mechanical Engineering with a focus in thermal-fluids. Anthony was an active student leader in Model United Nations and was a part of the National Rocket Association. After graduating, he got a job as an assistant research scientist for Combustion Research and Flow Technologies, Inc in Pipersville PA. Anthony always looked to the sky. He dreamed of either being a Navy pilot or working for a rocket company. His memory will live on through The Gift of Life- in a liver, a pancreas, two lungs, two kidneys, and a heart that will be woven into the fabric of others and allow them the opportunity to give of themselves to the world. He was a little boy who loved trains, cranes, and rockets… a young man who soared as an eagle in scouting, a son, a brother, and a friend. The world will benefit from his donation of time and self. He is preceded in death by his father, George Glusko. In addition to his mother, Priscilla, and sister, Jeaneatte, Anthony is survived by his brothers George and Jonathan, and sisters Lisa, Heather, and Stephanie; as well as seven nephews and three nieces. His family will hold a scripture service on Wednesday, February 19, 2020 at Holy Name of Jesus Church at 4pm, followed by a Celebration of Life at Tall Cedars of Lebanon (off Jonestown Road) at 5pm. In lieu of flowers the family requests donations may be made in memory of Anthony to Boy Scouts of America, Penn State Harrisburg Counseling Services or Model UN, Penn State Harrisburg, 777W. Harrisburg Pike, W110 Olmstead, Middletown PA 17057. Checks made payable to Penn State Harrisburg and designated towards Counseling Service or Model UN. The Musselman Funeral Home is Honored to Serve the Glusko Family. 324 Hummel Avenue, Lemoyne, PA 17043. www.musselmanfuneral.com

It is with an exceptionally heavy heart that we communicate the passing of Anthony Jean Glusko, 23, on Saturday, February 15, 2020. Anthony was stubborn, indecisive, and a great debater. He was nerd &#8211; a real honest to God nerd - one that... View Obituary & Service Information

The family of Anthony J. Glusko created this Life Tributes page to make it easy to share your memories.

It is with an exceptionally heavy heart that we communicate the...

Send flowers to the Glusko family.