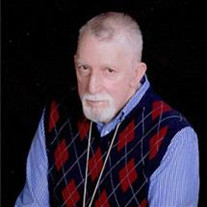 Arnold Foster Greenlund, a Pittsburgh native and long-time resident of Mechanicsburg, Pennsylvania, died on Wednesday, April 1st, 2015, at Holy Spirit Hospital following a prolonged illness. He was 79 years old. A 1954 graduate of Camp Hill High School, Mr. Greenlund worked in the transportation industry for much of his career, owning several businesses where he was widely known for his integrity.  After retirement he worked part-time at Pealer’s Flowers and Giant Supermarket. He was a member of the Free and Accepted Masons, Lowther Manor Lodge No. 781, of Camp Hill. Mr. Greenlund was a long-term and much beloved member of Trinity Evangelical Lutheran Church where he served on the church council and was an active member of Men’s Small Group. Many will remember him by the hundreds of simple wooden cross pendants which he offered to all he met as his way of witnessing to the power of God on our lives. Mr. Greenlund was born on March 15th, 1936, and was preceded in death by his parents, Tracy Elliott Glidden Greenlund and Elizabeth Arnold Greenlund; his brother, Tracy William Greenlund; and his sister, Elizabeth “Betts” Greenlund Moore. He is survived by his wife of 33 years, Anne Mashburn Greenlund, and three daughters, Pamela Padley of Belle Mead, New Jersey; Melissa Baker of Mechanicsburg, Pennsylvania; and Wendy Wright of Sanford, North Carolina; a sister-in-law Joan Greenlund, and a brother-in-law H. David Moore, Jr. He is also survived by a son-in-law, James Padley; seven grandchildren, Justin, Iain, Drew, Nikki, Ryan, Christopher, and Joey; and three great-grandsons, Benjamin, John Arnold, and Theodore. A Memorial Service will be held at 11:00 a.m. on Friday, April 10th, at Trinity Evangelical Lutheran Church, 2000 Chestnut Street, Camp Hill, Pennsylvania.  Pastor Guy Edmiston and Pastor Jack Horner will officiate.  Visitation with the family will be held prior to the service at 10:00 a.m.  The service will be followed by a reception and celebration of his life.  Memorial donations may be made to the Pastor’s Discretionary Fund of Trinity Lutheran Church. Musselman Funeral Home Is Honored To Serve The Greenlund Family. www.musselmanfuneral.com.

The family of Arnold Foster Greenlund created this Life Tributes page to make it easy to share your memories.

Send flowers to the Greenlund family.