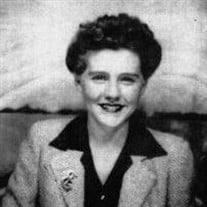 Betty Jane Baker, 93, of Lemoyne, passed away Tuesday, May 19, 2015, at ManorCare Camp Hill. Betty was born in Hummelstown, June 28, 1921, the daughter of the late Harry T. and Anna (Free) Gebhardt. She was the widow of Lloyd S. Baker who died in 1999. Married in 1942, they owned and operated Baker & Price Jewelers, in Harrisburg, with Lloyd’s cousin, R. Dean Price and his wife Amelia. Betty worked until the age of 89, closing the jewelry store in 2011.Betty was a long standing member of Calvary United Methodist Church in Lemoyne since the mid 50s. Betty was the last living Charter Member of Altrusa International, Inc. of Harrisburg, established in 1955, and she remained an active member for 60 years. She was instrumental in starting a chocolate-covered Easter Egg Fundraiser in 1971, which to date has awarded 80,000 dollars in Scholarship money, and tens of thousands more in donations, throughout the local communities. She continued each year since 1971 preparing homemade Easter eggs with the women of Altrusa. Betty was voted Altrusan of the Year in 1978. She served as President of Altrusa from 1980-1982. Betty was also active over the years in the Business and Professional Women’s Club of Harrisburg. As a very young girl she was a Mechanicsburg High School basketball player, and she loved swimming, especially high diving at the old Hershey swimming pool. She was also a lover of all sports and an enthusiastic spectator of her favorite game, basketball, as well as Major League baseball. Betty is survived by her daughter, Cheryl (Baker) Bombara (Gene); grandson, D. Edward Henry III; granddaughter, Kelley (Henry) Clark (Steve); great-granddaughters, Ashley L. Clark and Emily D. Clark; niece, Sandy Stringer (Dennis), and nephews, Alan Vinson and Craig Vinson. Betty was preceded in death by her sister, Pauline (Gebhardt) Habbyshaw; her niece, Betty Schulstadt; and her nephew, Michael Stringer. The family would like to thank the staff of ManorCare Camp Hill for their loving care over the past three years, and to Heartland Hospice Care, a very special thank you, as well, for your kindness and caring. Services will be held Wednesday, May 27 at Calvary United Methodist Church, 700 Market Street, Lemoyne, with Visitation at 10:00 a.m., Service at 11:00 a.m. Interment will follow at Filey’s Cemetery, Dillsburg. In lieu of flowers, contributions may be made to Calvary UMC, 700 Market Street, Lemoyne; Altrusa International of South Central PA, P.O. Box 602, Camp Hill, PA 17011-0602; or Heartland Hospice, 1200 Walnut Bottom Road, Suite 302, Carlisle, PA 17015. Musselman Funeral Home Is Honored To Serve The Baker Family. www.musselmanfuneral.com.

Betty Jane Baker, 93, of Lemoyne, passed away Tuesday, May 19, 2015, at ManorCare Camp Hill. Betty was born in Hummelstown, June 28, 1921, the daughter of the late Harry T. and Anna (Free) Gebhardt. She was the widow of Lloyd S. Baker who died... View Obituary & Service Information

The family of Betty Jane Baker created this Life Tributes page to make it easy to share your memories.

Send flowers to the Baker family.