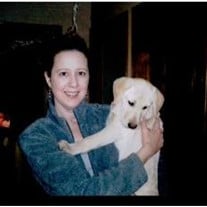 Brenda Marie Clark, 50, of Shiremanstown, passed away peacefully surrounded by her loving family, Sunday, March 20, 2016. Born in Camp Hill on March 13, 1966, she was the daughter of Lucie S. (Hodge) and the late Jesse Allen Clark. Brenda graduated from Cedar Cliff, class of 1984, and worked in human resources at Veritiv. She was a sweet and loving daughter, sister, and friend to all. In addition to her mother, she is survived by a brother; Michael Allen Clark and wife, Barbara of Shiremanstown, 2 sisters; Debbie Wade of Mechanicsburg and Vickie Gracey and husband, Carmen of Camp Hill, her loving companion; Brian Fealtman of Carlisle, many nieces and nephews, and her beloved dog, Marley. A viewing will be held from 5 to 7 PM on Wednesday, March 23, 2016 at Musselman Funeral Home, Lemoyne. Funeral services will be held at 10:00 AM on Thursday, March 24, 2016 at the funeral home. In lieu of flowers, contributions can be made to the American Cancer Society, PO Box 897, Hershey, PA 17033. Musselman Funeral Home Is Honored To Serve The Clark Family.

The family of Brenda Marie Clark created this Life Tributes page to make it easy to share your memories.

Send flowers to the Clark family.