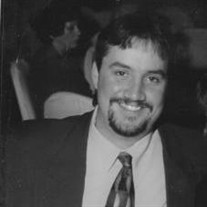 Brian Paul Mitsdarfer, 47, of Enola, passed away on June 20, 2015 after a courageous battle with ALS (Lou Gehrig’s Disease). He was born on January 2, 1968, in Williamsport, PA to Patricia Mitsdarfer and Paul Mitsdarfer. He graduated from Cedar Cliff High School and Cumberland Perry Vo-Tech in 1986. He was employed by Bruce Barclay Electrical Company until he started his own company in 1992 and then partnered in 1996 forming Mits-Myer Electrical Contractor, which he worked until he could no longer due to his illness. He is survived by his high school sweetheart and the love of his life, Vickie (Sheriff) Mitsdarfer, whom he was married to for 25 years, and his loving son, Gavin Mitsdarfer. In addition to his parents, he is also survived by a brother, Scott Mitsdarfer of Harrisburg, his step-mother, Dottie Mitsdarfer, of McMurray, PA, step-sisters, Jen and April and many other family and friends. Brian was an avid Hershey Bears and Pittsburgh Penguin hockey fan, enjoyed riding his Harley with his wife, camping, traveling, fishing and spending time with his son, of whom he was very proud. He was an avid advocate for finding a cure for ALS. Funeral services will be held at 2:00 pm on Wednesday, June 24, 2015 at Musselman Funeral Home, Lemoyne. Burial will be at Rolling Green Cemetery. Friends may call at the funeral home Tuesday evening from 6 to 8 pm and a half hour prior to the service on Wednesday. In lieu of flowers, the family is requesting donations be made in Brian’s memory to the ALS Therapy Development Institute, 300 Technology Square #400, Cambridge, Massachusetts 02139 or to the ALS Association of Greater Philadelphia Chapter, 321 Norristown Road, Suite 260, Ambler, PA 19002. Musselman Funeral Home Is Honored To Serve The Mitsdarfer Family.

Brian Paul Mitsdarfer, 47, of Enola, passed away on June 20, 2015 after a courageous battle with ALS (Lou Gehrig&#8217;s Disease). He was born on January 2, 1968, in Williamsport, PA to Patricia Mitsdarfer and Paul Mitsdarfer. He graduated... View Obituary & Service Information

The family of Brian Paul Mitsdarfer created this Life Tributes page to make it easy to share your memories.

Send flowers to the Mitsdarfer family.