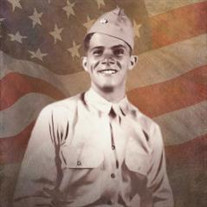 Charles D. Askey, Sr. Charles “Chic” D. Askey, Sr. passed away peacefully at his home on Wednesday, October 7, 2015. Charles is survived by his loving wife of 71 years, Theresa (Hambley). He is survived by his four children and their spouses Sandra (Richard) Adams of Churchville, PA; Bonita Shearer of Camp Hill, PA; Charles, Jr. (Sharon) of Mechanicsburg, PA and Richard (Edward Dishong) of Etters, PA. He is also survived by 6 granddaughters and 13 great-grandchildren. Charles was born December 24, 1924 in Patton, PA to Richard and Marie Askey. He lost his father as a youngster and accepted responsibility for his family early in his life. He is predeceased by his parents and his brother, Arthur Askey and sister, Catherine Helman. In March of 1943, Charles enlisted in the Armed Forces to serve his country during World War II. Wounded during the Invasion of Normandy, Charles spent 28 days in a French hospital. He returned to active service to fight in the Battle of the Bulge and participated in the liberation of prisoners at Camp Buchenwald in Nazi Germany. A sharpshooter, Charles was very proud of his service to his country and was honorably discharged on November 11, 1945. A contractor, Charles was always happy when helping friends, neighbors and family with home improvement projects. A mass of Christian burial will be celebrated at Good Shepherd Catholic Church in Camp Hill on Monday, October 12, 2015 at 1:00 PM. Visitations will be welcome at the church beginning at 11:00 AM. In respect of Charles service to his country, burial will occur on Tuesday, October 13, 2015 at 10:30 AM at the Fort Indiantown Gap National Cemetery. Memorial contributions may be made to Good Shepherd Catholic Church, 3435 Trindle Road, Camp Hill, PA 17011 or Wounded Warrior Project, PO Box 758517, Topeka, Kansas 66675. Musselman Funeral Home Is Honored To Serve The Askey Family.

The family of Charles D. Askey, Sr. created this Life Tributes page to make it easy to share your memories.

Send flowers to the Askey, family.