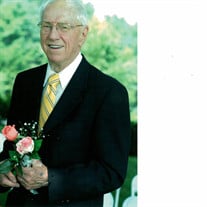 Charles G. Fickes Jr. passed away on November 27th, 2018 at Cornwall Manor in Cornwall,Pa. at the age of 98. Born in Harrisburg Pa. on August 30th, 1920, he was the eldest son of the late Charles Glenn Fickes and Marguerite Brunner Fickes. Charles attended Mercersburg Academy, graduating in 1940, and then continued his education at the University of Pennsylvania Wharton School. In 1942, he was drafted into the United States Army/Air Force and served as a radar specialist in England during World War II. When his duty ended in 1945, Charles returned to the Wharton School and graduated in 1946. He then joined the Henry and Rocky insurance agency as a salesman, and eventually purchased and became president of the firm until 1970.In 1977 Charles retired from the insurance business and became an instructor at the Pennsylvania State University, Capital Campus, in Middletown, Pa. There he taught insurance courses for 15 years until his retirement at the age of 72. Charles was a lifetime member of the West Shore Country Club. His hobbies included swimming, fly fishing, golf and tennis, but his main interest was raising roses for shows in which he won many awards. Charles became interested in roses when his parents gave him four rose bushes. His mother, who showed her own prize roses, was a member of the West Shore Rose Society, and Charles soon followed in her footsteps, with roses becoming a life long interest of his own. He too became a life member of the Rose Society and eventually became a rose judge, serving for twenty years in the eastern Pa. region. Charles was an active member of the Pennsylvania Association for Insurance Agents, the Kiwanis Club, and the Harrisburg YMCA. Additionally, he attended Market Square Presbyterian Church where he was a Sunday School teacher, superintendent of the Sunday School program,and served on the board of trustees for many years. Charles will be remembered for his numerous admirable traits; from his easy going nature, generosity, hard work ethic and business sense, to his wit, wise counsel, sense of humor and infectious laugh. He was known for having an extraordinary gift of storytelling and loved entertaining and being around others as he was very sociable and had many friends. He will be greatly missed by his friends and family. His children, grandchildren, and great grandchildren all looked up to him, admired him, and loved him so much. Charles was preceded in death by his wife Jane, to whom he was married for 69 years, and by his two younger brothers Donald and Joseph. He is survived by his son John, and wife Betsy Fickes of Mifflinburg Pa., his daughter Carolyn and husband David Hartman of Mt. Gretna Pa., their three children Bethany and husband Tim VanSchoick of Mt. Joy Pa., daughter Amy and husband Vincent Brumbach of Greensboro, North Carolina, daughter Emily and husband Travis Dunk of Middletown Pa., and six great grandchildren. Charles loved Mt. Gretna and spoke often of his cherished childhood memories there. A celebration in honor of his life will be held sometime in the spring at the Mt. Gretna United Methodist Church. Information will be forthcoming on the Musselman Funeral Home website. The Musselman Funeral home Is Honored To Serve The Fickes Family. 324 Hummel Avenue Lemoyne, PA. 17043.

Charles G. Fickes Jr. passed away on November 27th, 2018 at Cornwall Manor in Cornwall,Pa. at the age of 98. Born in Harrisburg Pa. on August 30th, 1920, he was the eldest son of the late Charles Glenn Fickes and Marguerite Brunner Fickes. Charles... View Obituary & Service Information

The family of Charles G. Fickes Jr. created this Life Tributes page to make it easy to share your memories.

Send flowers to the Fickes family.