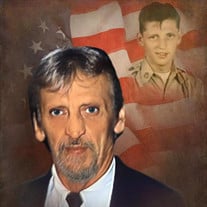 Charles “Bud” H. Hollingsworth Jr. 79; of Camp Hill, passed away peacefully on Saturday, April 16, 2022 at his home. Charles was born on January 16, 1943 in Harrisburg, PA., and was a son to the late Charles H. Hollingsworth Sr. and Beatrice (Stahl) Hollingsworth. Charles was a car enthusiast and loved hunting. He was a United States Army Veteran serving during the Vietnam War. He was a member of the Lower Allen VFW Post – 7530. Charles is survived by his loving wife, Carolyn L (Gsell) Hollingsworth, sons, Carl E. Hollingsworth and wife Cynthia A., Jeremy L. Hollingsworth, Daniel A. Hollingsworth, daughters, Elizabeth A. Bowen and husband Timothy J. Bowen, a brother, William Hollingsworth, a sister, Kathy Brinton, 14 Grandchildren, several Great grandchildren and many nieces and nephews. In addition to his parents Charles is preceded in death by, a daughter, Cindy A. Barnes, a brother, Eugene A. Hollingsworth, and a sister Judy K. Wickenhiser. Funeral Services will be held on Tuesday, April 26, 2022 at 11:00 AM.; in the Musselman Funeral Home. A viewing will be held from 10 to 11:00 AM. Burial with Full Military Honors will follow at Rolling Green Cemetery, Camp Hill. In lieu of Flowers please consider a donation to help with the cost of “Buds” funeral expenses. C/O Musselman Funeral Home Inc. 324 Hummel Avenue Lemoyne, PA. 17043. Musselman

The family of Charles H. Hollingsworth Jr. created this Life Tributes page to make it easy to share your memories.

Send flowers to the Hollingsworth family.