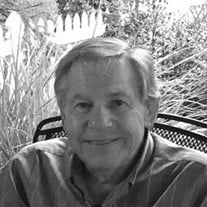 Charles N. Roy, “Chuck” to everyone since childhood, passed away at Harrisburg Hospital on December 22, 2017, aged 66. He lived in Camp Hill. Chuck was born and raised in Somerset, Pennsylvania, grandson of a coal mining family whose fortunes were erased during the Great Depression. The summers of his youth were spent on St. Simons Island, Georgia, where his extended family’s beloved cottage preserved their connections to the American South. The beach cottage remained a frequent destination of Chuck’s family even as his own children grew to college age. In recent years, Chuck’s defining passion was camping with his family and friends. The RV trailer he shared with Joyce, and the campfire in front of it, was home base for many of his extended family during sunny weekends at Pinchot State Park. He leaves behind an unfulfilled dream to camp his way across the United States in 2018. He also loved fishing: while nobody would reasonably call Chuck a “morning person”, the one sure thing that would always get him out of bed was a pair of hip waders and a bubbling stream all to himself, well stocked with huge trout. Chuck is survived by his wife of 45 years, Joyce Alwine Roy; children Jeremy A. Roy of Woodside, CA, Matthew C. Roy and wife Brittney of Camp Hill, Courtney H. Roy of Brooklyn, New York; and sister Margaret J. Roy of Somerset. He was blessed with two grandchildren, Oliver and Gwyneth Roy, who found countless creative ways to fill Chuck’s days with joy since he retired from the Pennsylvania Turnpike Commission in 2016. Chuck ardently supported the mission of his church, and loved the community of its congregation, in which he found many lifelong friendships and could be found most Sundays operating the video presentation for worship services. There could therefore be no more fitting place to honor and celebrate his memory than Trinity Lutheran Church, where a funeral service will be held on Thursday, December 28 at 11:30 AM, with visitation preceding at 10:00 AM, also at the church. We request any monetary donations be made in his memory to the church. Trinity Lutheran Church, 2000 Chestnut Street, Camp Hill. 717-737-8635. Musselman Funeral Home Is Honored To Serve The Roy Family.

Charles N. Roy, &#8220;Chuck&#8221; to everyone since childhood, passed away at Harrisburg Hospital on December 22, 2017, aged 66. He lived in Camp Hill. Chuck was born and raised in Somerset, Pennsylvania, grandson of a coal mining family whose... View Obituary & Service Information

The family of Charles N. Roy "Chuck" created this Life Tributes page to make it easy to share your memories.

Charles N. Roy, “Chuck” to everyone since childhood, passed away...