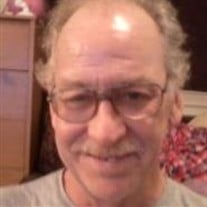 Clarence “Mike” Frank, 61, of Enola, passed away peacefully in his home on Thursday, April 28, 2016. A son of the late Grace M. (Heck) and Clarence I. Frank, he was born in Mechanicsburg on October 16, 1954. Mike enjoyed hunting and fishing in his younger years but always loved Elvis Presley. Mike owned and operated C. Frank & Sons HVAC services. Mike is survived by his wife, Mary B. (Stauffer), 4 children; Angelique M. formally Frank, Heather E. formally Frank, Courtney M. Frank of Enola, and Lindsay A. Frank of Enola, a sister; Elaine M. Grove and husband, Ron or Enola, 3 brothers; Jeffrey E. of Camp Hill, Richard M. and Kim of Liverpool and Lee A. Frank and Eva of Enola, many nieces and nephews, and 2 grandchildren; Hannah L. Frank and Malekai A. Etzweiler. A viewing will be held Friday, May 6, 2016 at 11 AM at the Musselman Funeral Home with a funeral service immediately following. Burial will be at Rolling Green Cemetery. In lieu of flowers, contributions may be made in Mike’s name to the American Cancer Society, P. O. Box 897, Hershey, PA 17033. Musselman Funeral Home Is Honored To Serve The Frank Family.

The family of Clarence Mike Frank created this Life Tributes page to make it easy to share your memories.

Clarence “Mike” Frank, 61, of Enola, passed away peacefully in...

Send flowers to the Frank family.