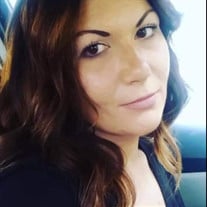 Constance Eden Elizabeth Ames born on July 29th, 1995 in Harrisburg, Pennsylvania. She passed away at the age of 25 on March 28, 2021 after years of suffering. Constance is survived by her Mother Dawn Englebright of Harrisburg, Pennsylvania; Father Stephen Ames of Harrisburg, Pennsylvania; sister Shaleena Medellin of Savannah, Georgia; sister Sierra Ames of Penbrook, Pennsylvania; brother Max Ames of Seattle Washington; brother Michael Ames of Harrisburg Pennsylvania; paternal grandparents Stephen Ames Sr. and Margrett Ames of Harrisburg Pennsylvania and her little angel Iz. Constance loved nature, she found enjoyment in the sound of water flowing against the rocks and listening to the birds singing their songs. She saw beauty everywhere and she was most happy when the trees waved and she would do a little dance and wave back encouraging others to do the same. She loved gazing at the moon and the stars at night--while she made plans, set goals, and reflected on the normal life as she called it -the life she had before-she had been dealt the hand that ended hers. She longed to be able to both work and go back to school again and live a simplistic life-a life without torture free from illness pain and chaos. She marveled at the beauty around her and wanted to believed there was good in everyone. She was kind, loving, gentle and strong. She was true to her soul and was quite philosophical while her whimsical sense of humor made everyone laugh. She loved making people happy and her laugh was infectious. Constance’s will and strength amazed us and in the darkest times of life Constance was always able to see the light. She truly believed there was good in others. She had a huge heart that she tried to hide from the world and was a private and independent lady who always tried to fix things in her life without asking for help. Even when she was ill, struggling and in need herself, she gave to others selflessly and always found it in her heart to forgive those who trespassed against her but sought justice, not for herself, but so others would not be harmed. She was always there to help someone in need. She gave when she herself didn't have it to give and always saw the potential in others. She was loved dearly by family and friends and will be forever missed. A visitation for Constance will be held at Musselman Funeral Home at 6 to 8 P.M. on Monday, April 19, 2021. A live streaming of the visitation will take place on the Musselman Funeral Home Facebook page. A private burial will take place at St. John’s Cemetery in Mechanicsburg, Pennsylvania.

The family of Constance Eden Elizabeth Ames created this Life Tributes page to make it easy to share your memories.

Send flowers to the Ames family.