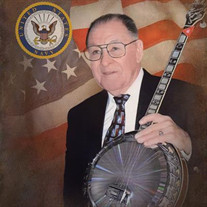 D. Wayne Crow, 94 of Mechanicsburg passed away on Saturday, December 21, 2019 at Country Meadows. Wayne was born on July 28, 1925 in Lemoyne, PA., the son of Lloyd N. and Marjery A. Crow. He graduated from Lemoyne High School in 1943, after which he served for nearly 3 years in the Navy during WWII, working as a Court Reporter. He retired from Nationwide Insurance Co. after more than 41 years of service. He was a member of Robert Burns Lodge #464 F&AM; Harrisburg Consistory; Zembo Shrine and Harrisburg Forest #43 Tall Cedars of Lebanon, all of which he carried membership in for more than 60 years. He was Director of the Zembo Drum and Bugle Corps for 7 years. Wayne was the last living Charter Member of the Zembo String Band. He was a Tenor Banjo player and played the banjo with several groups around Harrisburg. In 1941 and 1942 he played with his brother, Robert and Dale Krebs on the Ed Smith Juniortown Program (WHP Radio) from the stage of the Rio Theatre on Walnut Street in Harrisburg. An active member of the All Frets Organization, Bayside Banjo Aggregation of Baltimore, and the Banjo Club. He was preceded in death by his wife of 50 years, Louise B. Crow (1999) and brothers Paul E. Crow (2002) and Robert Crow (2008). He is survived by his friend - Joann C. Giehler; cousins - Gail Ashcroft, Wallingford, PA., Barbara Kosloski, The Villages, FL., Elva Johnson, Philadelphia, PA., John Twig, Camp Hill, PA., and Judith Walz, Ellenton, FL.; nephews - Dean Crow, Chambersburg, PA., Keith Crow, Plano, TX., and Adam King, Flint MI.; and nieces - Lauri King, Denver CO., and Louisa King, Ft. Lauderdale, FL. A viewing will be held on Friday, December 27, 2019 from 10:00 A.M. to 11:00 A.M. at the Musselman Funeral Home, Lemoyne, PA. Funeral Services will begin at 11:00 A.M. Burial will follow at Rolling Green Cemetery, Camp Hill, PA. The Musselman Funeral Home is Honored to Serve The Crow Family, 324 Hummel Avenue Lemoyne, PA. 17043. www.musselmanfuneral.com MUSSELMAN

D. Wayne Crow, 94 of Mechanicsburg passed away on Saturday, December 21, 2019 at Country Meadows. Wayne was born on July 28, 1925 in Lemoyne, PA., the son of Lloyd N. and Marjery A. Crow. He graduated from Lemoyne High School in 1943, after... View Obituary & Service Information

The family of D. Wayne Crow created this Life Tributes page to make it easy to share your memories.

D. Wayne Crow, 94 of Mechanicsburg passed away on Saturday, December...

Send flowers to the Crow family.