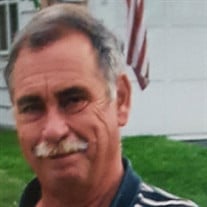 David Eugene Martson, age 70, of Camp Hill, passed away peacefully, Sunday evening, October 8, 2017 at Holy Spirit Hospital, Camp Hill, surrounded by his loving family and friends after a courageous battle with brain cancer. Dave was a loving husband, father, grandfather (Pap Pap) and brother. Born in New Cumberland, March 19, 1947, he was the youngest son of the late Donald Martson and Dorothy (Bowen) Martson. Dave was preceded in death by his wife, Vickie (Hostetler) Martson, who passed away February 9, 2017 and a step-son, Matthew Levan. Dave was a 1965 graduate of Cedar Cliff High School, and retired from Norfolk Southern Railroad after 38 years. Dave was of the Methodist faith. Dave was a member of both the American Legion and VFW of New Cumberland. Dave enjoyed watching old television shows (Mash and Johnny Carson), scary movies, his kitties, his favorite being Jakey, golfing and playing poker with friends, but most of all he enjoyed mowing his and the neighbor’s yards with his riding mower his daughter, Hollie bought him. Dave is survived by his brother, Donald Martson of Florida, his children; Hollie Martson of Wellsville, Jason Martson of Camp Hill, Jeff Martson (Kristy) of Carlisle, Lisa Martson of Mechanicsburg, Chris Martson of Ohio, a stepson; Mike Levan of North Carolina, and several grandchildren. A memorial service will be held to honor Dave’s life at Grace United Methodist Church, 313 Herman Avenue, Lemoyne, PA on Thursday, October 19, 2017 at 3:00 PM with Rev. Jason Schwartzman officiating. The family will receive friends in the church parlor from 1:00 PM until the service time. Inurnment will be private and at the convenience of the family. In lieu of flowers, the family requests donations in Dave’s memory be sent to either the American Cancer Society, Route 422 and Sipe Avenue, Hershey, PA 17033 of the Humane Society of Harrisburg. Musselman Funeral Home Is Honored To Serve The Martson Family.

The family of David Eugene Martson created this Life Tributes page to make it easy to share your memories.

Send flowers to the Martson family.