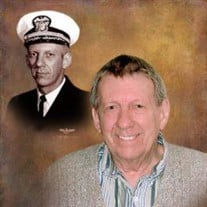 Delbert E Brandenburg CDR (Ret) U S Navy Del Brandenburg passed away peacefully at his home on Monday, October 24th.  He was born May 3rd, 1928 in Cuba, Ohio to the late Fred and Hazel Brandenburg Rucker. He was preceded in death by his first wife, Agnes Brandenburg, his second wife Francis Garman and a daughter, Cheryl Anderson. He is survived by his two sons Larry Brandenburg and wife Agnes, Steven Brandenburg, daughter  Barbara Gibson and husband Greg, Grandchildren Thomas Anderson and wife Christina, Matthew Gibson and fiancé Abbey, Karen Glatfelter and husband Ben, Great grandchildren Kaylee Lopez, Karah and Karly Anderson, Owen and Lucas Glatfelter, Brothers Fred Brandenburg and wife Pat and Tom Rucker and wife Bonnie. Growing up in Washington Court House, Ohio, he started working early as a paperboy and at his family’s  car dealership.  Upon graduating from high school, he went to the University of Cincinnati. After his sophomore year he enlisted in the Navy as an Ensign under the Navy’s newly formed Flying Midshipmen program. He completed his flight school training and went on to become a pilot and retired in 1969after 23 years of service. He proudly served in the Pacific Fleet on the USS Coral Sea, USS Ticonderoga, and USS Ranger.  He flew recon and fueling operations in the Viet Nam conflict earning the Navy Commendation Medal and the Air Medal.  While in the Navy, he continued his education and graduated from Georgetown University in Washington DC. After retiring from the Navy he had a second career with the Pennsylvania and Atlantic Hardware Association. He will be greatly missed for all time by his loving family. Our favorite times were watching sports and just being together. He was a great American patriot who taught his children to love America and he was Republican to the core. Our dad was a simple man from humble beginnings who accomplished much in his life. The most important thing he offered us was his love. His family would like to thank the Doctors, Nurses and staff from the 7th floor at Holy Spirit Hospital, Leann and Heather from Asana Hospice, and Chris and Kate from Home Instead for their compassion and excellent care they showed our dad. Memorial services will be held on Saturday, October 29th at 11:00 am at the Musselman Funeral Home located at 324 Hummel Avenue in Lemoyne, PA. Internment will immediately follow at St. Johns Cemetery located on Trindle Road in Mechanicsburg, PA. A final thought from our dad: Go NAVY, Beat Army! Musselman Funeral Home Is Honored To Serve The Brandenburg Family.

Delbert E Brandenburg CDR (Ret) U S Navy Del Brandenburg passed away peacefully at his home on Monday, October 24th.&#160; He was born May 3rd, 1928 in Cuba, Ohio to the late Fred and Hazel Brandenburg Rucker. He was preceded in death by his... View Obituary & Service Information

The family of Delbert E. Brandenburg created this Life Tributes page to make it easy to share your memories.

Send flowers to the Brandenburg family.