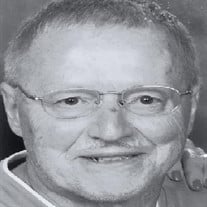 M. Dennis Hohman, age 77, of Mechanicsburg passed away on December 21, 2019 after a courageous battle against cancer. Dennis was born November 11, 1942 to the late Melvin Ralph Hohman and Eva Maria “Ted” (Ott) Hohman. In his final hours, Dennis was at home surrounded by the people of which he was most proud: his wife, Bonnie K. (Schoppert) Hohman; daughters, Teresa D. Stoner (Colin G. Stoner), and Angie J. Hohman (Paul J. Eads); and the lights of his world grandchildren, Olivia K. Stoner, Cecilia A. Stoner and Joshua W. Stoner. One brother Gary L. Hohman of Rouzerville, Pa. survives him. Born in Ayr Township, Fulton County, Pa., Dennis later moved to Cove Gap, Franklin County, Pa. Dennis was a 1961 graduate of James Buchanan High School. Upon graduation, Dennis accepted a four-year apprenticeship at Landis Tool Company where he ascended to become Superintendent of the Machine Shop and Assembly Floor before retiring in 2000. Dennis proudly served his country for six years in the Army Reserve’s Company B, 1st Battalion, 314th Infantry Division, 157th SIB as a mortar crewmember. After retirement, Dennis and his wife Bonnie enjoyed many winters in Hilton Head, SC; Homosassa Springs, FL.; and his beloved Lake Havasu City, Arizona, returning home to Mechanicsburg in the summer months to spend time with his children and grandchildren. While in Lake Havasu City, Dennis developed many lasting friendships and enjoyed leading the Crazy Horse Hiking Group through the deserts of Arizona. In addition, Dennis was a life-long diehard Penn State fan and enjoyed his numismatist and philatelist hobbies. Dennis was an active member of the Lakeview Community Church in Lake Havasu, AZ and Christ Community Church in Lower Allen Township. It was very important for him to know that he would meet his heavenly father when he departed from his worldly being. Dennis will be sadly missed by his family and friends. Family and friends in Pennsylvania are encouraged to visit the residence of his daughter, Teresa Stoner on December 27, 2019 between 6-8 pm where we will share memories of this incredible man. Church services will be held in Lake Havasu City, AZ. in the coming months. Memorial contributions can be made in Dennis’s honor to the Melanoma Research Foundation, P.O. Box 759329, Baltimore, MD 21275-9329

The family of Dennis Hohman created this Life Tributes page to make it easy to share your memories.

M. Dennis Hohman, age 77, of Mechanicsburg passed away on December...

Send flowers to the Hohman family.