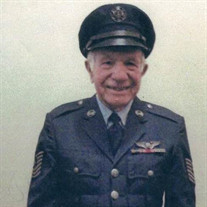 Donald H. Conley, 97, of New Cumberland, passed away surrounded by family on Tuesday, March 20, 2018 at home. A son of the late Joseph and Tillie (Snyder) Conley, he was born in Lemoyne on October 1, 1920. He was a proud Army Air Force veteran who served in WW II, and the Korean and Vietnam wars. He also served in the famed 303rd “Hell’s Angel’s” as a top Ball Turret Gunner on B17’s. He flew 29 missions in Germany, France and Czechoslovakia. He retired from the former New Cumberland Army Depot, the 193rd CAM Squadron, PA Air National Guard, and West Shore School District as a bus driver. He also drove truck for the Redland Beer & Soda, and drove shuttle bus for Harrisburg International Airport. He was a member of the 193rd Consolidated Air National Guard, Central PA Callers Association of Square Dancing, and Lewisberry Valley Grange, where he made milkshakes at the Farm Show. He served as Scout Master and coached and played softball for the American Legion. He was an active member of Salem United Methodist Church, Etters, where he made Easter eggs. He enjoyed spending time with his family and friends, and enjoyed gardening in his vegetable garden. In addition to his parents, he was preceded in death by his siblings; Theal, Polly, Joe and Dick, two former wives; Violet Louise Zimmerman and Lillian Gruber Conley. He is survived by his wife of 17 ½ years, Judy (Ryan) Conley, daughters; Patricia Baughman (William), Glenda Naylor (Richard) and Lisa Malley, step-children; Curvin Bixler, Alison Lippy, Joann Fake and David “Butch” Schiedler, six grandchildren; Scott and Josh Naylor, Peter Baughman, and Brandon, Lilly and Faith Malley, step-grandson; Zachary Bixler, five great grandchildren; Adam, Kaitlyn, Caleb, Ryan and Daniel Naylor, his beloved granddog, Gus, and many nieces and nephews. A viewing will be held from 1:00 to 3:00 PM on Saturday, March 24, 2018 at Salem United Methodist Church, Etters with funeral services beginning at 3:00 pm. Burial will immediately follow at the church cemetery. In lieu of flowers, contributions can be made to Hospice of Central PA, 1320 Linglestown Rd, Harrisburg, PA 17110. Musselman Funeral Home Is Honored To Serve The Conley Family.

Donald H. Conley, 97, of New Cumberland, passed away surrounded by family on Tuesday, March 20, 2018 at home. A son of the late Joseph and Tillie (Snyder) Conley, he was born in Lemoyne on October 1, 1920. He was a proud Army Air Force veteran... View Obituary & Service Information

The family of Donald H. Conley created this Life Tributes page to make it easy to share your memories.

Send flowers to the Conley family.