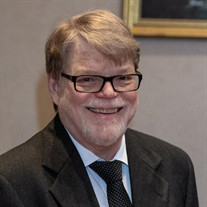 Donald Lester Weldon of Camp Hill, PA passed peacefully in his sleep November 30, 2020 with his wife Vicky by his side. On October 1, 1951 Don was born at Garfield Memorial Hospital, Washington D.C., to N. Lester Weldon (Perry Co., PA) and Gertrude Wingert Weldon (Summerdale, PA). Don is survived by his loving wife, Vicky Lee Weldon (Fake), and stepchildren: Lucy Rose (Jack) Irvine, CA; Carisa Kozicki (Brian) Camp Hill, PA; and Carla Crowen (Rye) Camp Hill, PA; and his grandchildren Sullyvan, Maddox, and Emerson. Don is also survived by sisters Judi Spessler (Barrie) Mechanicsburg, PA; Lori Wiedman (George) Shiremanstown, PA; numerous brothers-in-law and sisters-in law, cousins, nieces, nephews, and friends. His parents predeceased him. A 1969 graduate of Cumberland Valley, he was a member of the Wrestling Team, Golf Team, and Band. Don played the trombone, and enjoyed zoology, and playing pool. Don's interest in automobiles and working on cars began in his youth. Wrestling was Don's sport, and he was passionate about it. He was especially proud of placing 3rd in an AAU Tournament as a college freshman. Don received a bachelor’s degree in Accounting from Shippensburg State College in 1973 followed proudly by his MBA in 1980. He worked as a substitute teacher in the Harrisburg area before employment with the Pennsylvania Dept. of Education. Don worked with funding and interpretation of federal laws for multi-million-dollar programs such as the School Lunch Program and JTPA (Job Training and Partnership Act). In mid-life, Don made a career change and trained as a meat-cutter in North Carolina and Giant Store in Camp Hill. He was a hard worker, and management knew they could depend on him. After retirement, Don returned to work part- time until he began chemo in March 2020. Don had an extraordinary sense of humor and a variety of interests. He enjoyed yard work, watching and feeding the multitude of birds that visited his yard, gardening, and tinkering. This included fixing things around the house such as broken garden hoses, solar lights, lawnmowers, and a snowblower. Don enjoyed vegetable gardening: making pickles and chili sauce from his harvest. His garden included roses and heirloom black raspberries. Don was an avid Phillies fan through the 2020 season of cardboard cutouts in the stands -- remembering the days of season tickets with friends 40 years in the past. Some friends called him Donnie. Don enjoyed playing his guitars and listening to contemporary jazz like Rippingtons, Fourplay, Pat Metheny Group, Yellowjackets, and Hiroshima. He enjoyed reading the Patriot News, magazines, and did crossword puzzles daily. Don also enjoyed watching Penn State and Eagles football, Wrestling Championships, nature shows, westerns, and CBS Sunday Morning. His beloved animal companion, Pip the cat, misses him dearly. Don and Vicky enjoyed Sunday afternoon pinochle games and dinners for many years at Cathy and Doug's. They enjoyed trips to Rehoboth Beach, Gettysburg, Inner Harbor, N.Carolina, and Florida and were fortunate to share their love in a 36-year relationship. Don loved to cook, grill, and bake and was the chef at the Weldon household. He often made a ham or turkey for family celebrations and was known for his desserts such as his black raspberry cheesecake and pumpkin cheesecake. His coveted gluten-free stuffing never had a crumb left in the pan. With Don's support and understanding, his wife, Vicky, was able to spend valuable time with her children and grandchildren both near and far. Don loved his family and family gatherings. He was a kind and gentle soul who was loved greatly. After years of metastatic prostate cancer, Don said he fought as he wrestled-- to the end. A Celebration of Don's Life is planned for Spring 2021. Those wishing to make memorial contributions in Don's name may contribute to: Best Friends Furever (meow) P.O. Box 6572, Harrisburg, PA 17112; Bethesda Mission, P.O. Box 3041, Harrisburg, PA 17105, or Prostate or other Cancer Research of your choice. Private burial at Dellville Cemetary, PA; arrangements by Musselman Funeral Home and Cremation Services, Lemoyne, PA. The Musselman Funeral Home is Honored to Serve The Weldon Family. 324 Hummel Avenue, Lemoyne PA 17043. MUSSELMAN

Donald Lester Weldon of Camp Hill, PA passed peacefully in his sleep November 30, 2020 with his wife Vicky by his side. On October 1, 1951 Don was born at Garfield Memorial Hospital, Washington D.C., to N. Lester Weldon (Perry Co., PA) and... View Obituary & Service Information

The family of Donald L. Weldon created this Life Tributes page to make it easy to share your memories.

Send flowers to the Weldon family.