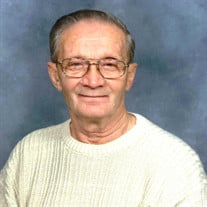 Edgar Guest Shimmel, 91, of Camp Hill and formerly Summerdale and Lemoyne, passed away on January 4, 2021 at Holy Spirit Hospital. He was the son of the late Robert and Blanche Shimmel of Lewisberry. He was preceded in death by his parents, his wife Clara, his brothers William Shimmel and Donald Thompson, and a sister Francis Lucas. He is survived by his son, Gary Shimmel (Peggy) of Marysville, his daughter Patricia Beasley (David) of Lemoyne, Grandsons Anthony Beasley (Alyssa) of Lemoyne and Christopher Beasley (Bre) of York Haven. He is also survived by Brothers John Shimmel (Delores) of Lewisberry and Robert Shimmel (Beverly) of Florida, and a Sister Caroline Long (Bruce) of York and many Nieces and Nephews. He was a long-time employee of the former Manbeck’s Bakery in Lemoyne and retired after many years at Weis Market in Lemoyne where many customers new him as “Eddie from the pickle aisle”. He served his Country in the Army National Guard during the Korean War and obtained the rank of Sergeant. He served his Community for many years as a Volunteer Firefighter, Ambulance Attendant, and Webelos Scout Leader. He was a Life Member of the Summerdale (now Northeast Fire & Rescue) and Lemoyne (now West Shore Bureau of Fire) Fire Departments. He was a charter Member of the Fire Museum of Greater Harrisburg. He was a member of the Summerdale United Methodist Church. Ed enjoyed time with his family, fishing, simply sitting on his back porch and feeding the birds, and although he was no longer an active Firefighter, he was still very interested in the activity of the local volunteer fire service. Services will be private and for the family. In lieu of flowers, memorial donations are requested to: Northeast Fire & Rescue, 202 Third Street, Enola, PA 17025 West Shore Bureau of Fire, 510 Herman Avenue, Lemoyne, PA 17043

Edgar Guest Shimmel, 91, of Camp Hill and formerly Summerdale and Lemoyne, passed away on January 4, 2021 at Holy Spirit Hospital. He was the son of the late Robert and Blanche Shimmel of Lewisberry. He was preceded in death by his parents,... View Obituary & Service Information

The family of Edgar G. Shimmel created this Life Tributes page to make it easy to share your memories.

Send flowers to the Shimmel family.