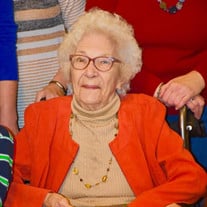 Edna Grissinger Neyhart, 101 years old, passed away on Saturday, May 16, 2020, in the Jewish Home of Greater Harrisburg. Edna formerly resided at the Woods at Cedar Run, and was a long time resident of New Cumberland PA. Born in Carlisle PA on April 10, 1919, Edna was the daughter of the late Theodore and Lou (Meals) Grissinger. She was predeceased by her husband of 47 years, Truman K Neyhart, Sr. Edna was a 1937 graduate of Carlisle High School and attended Shippensburg State Teachers College. Edna lived a full life focused on family, faith and community. She was warm and welcoming to anyone fortunate enough to meet her. Edna loved her time with family at the beach in Ship Bottom and Cape May, was an avid, lifelong reader, and enjoyed being involved in her parish and community. She was the center of attention at any family gathering. Edna was particularly fond of her grandchildren. She was a Yankees fan and was well known for her enjoyment of Budweiser. Edna was among the first group of women to join the WAVES (Women Accepted for Volunteers Emergency Service), a division of the Navy, during World War II. She and her six brothers served in the Navy during the war, the largest group of siblings at that time to do so. After her discharge, she continued to stay in touch with her WAVES friends and became a member of the Blue Mountain WAVES division. She was also a lifetime member of the New Cumberland American Legion which on her 100th birthday honored her as the grand marshal for the New Cumberland Memorial Day parade. Edna was a member of St. Theresa Parish in New Cumberland PA, where she was very active in parish life. She was a teacher at St Theresa School for 15 years and was instrumental in the development of the school’s library where she was the librarian for 22 years. Edna held leadership roles in the Church Council and the Council of Catholic Women. She established a parish library and was the librarian. Edna was a member of the Catholic Library Volunteers of America. Edna also involved herself in her community. She volunteered at the New Cumberland Public Library, and was a member and past president of the New Cumberland Women’s Club. While a resident of the Woods at Cedar Run, she was president of the resident council, the facility librarian, and a member of the Sunshine Ladies. She continued to participate in activities and connecting with the people while a resident in the Jewish Home. In addition to her husband, Edna was predeceased by her brothers, Theodore, Glen, James, Richard, Kenneth, and Edward, and her sisters, Mary Lou Kohler and Sybilla Ilgenfritz. Edna is survived by her children, Truman Kelley Neyhart, Jr. (Celine) of Kutztown PA, Edna Rae Smith (Verne) of Dauphin PA, Joseph (Terry) of Dillsburg PA, and Anna Fulginiti of Wormleysburg PA, and 14 grandchildren and 8 great-grandchildren, as well as many nephews and nieces. Due to COVID-19 restrictions, the internment will be private. At a future date a Mass and a memorial gathering will be held to celebrate Edna’s life. Memorial contributions can be made to St. Theresa School, “The Edna Neyhart Scholarship Fund”, Attn. Mr. Matthew Shore, 1200 Bridge Street, New Cumberland, PA 17070 or to the New Cumberland Public Library, “In Memory of Edna Neyhart”, 1 Benjamin Plaza, New Cumberland, PA 17070. The family would like to extend sincere appreciation to the staff at the Jewish Home for their care and love of our mom during her stay at the Jewish Home. The Musselman Funeral Home is Honored to Serve The Neyhart Family. 324 Hummel Avenue, Lemoyne, Pennsylvania 17043.

Edna Grissinger Neyhart, 101 years old, passed away on Saturday, May 16, 2020, in the Jewish Home of Greater Harrisburg. Edna formerly resided at the Woods at Cedar Run, and was a long time resident of New Cumberland PA. Born in Carlisle PA... View Obituary & Service Information

The family of Edna R. Neyhart created this Life Tributes page to make it easy to share your memories.

Send flowers to the Neyhart family.