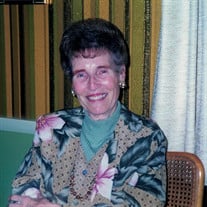 Elizabeth “Betty” O’Donnell, 93, of Camp Hill passed away peacefully on January 2, 2018. She was born February 21, 1924 in Sewickley, PA, daughter of the late Greta and Charles Isenberg of Coraopolis, PA. Betty attended the Coraopolis schools, and after graduating high school went on to Juniata College to study music. After 4 years, she graduated with a degree in public school music, 1945. She began teaching in the Pittsburgh area until World War II was ending, and since she had found her college “mate”, she married John E. O’Donnell on June 8, 1946. Jack was attending Pitt Dental School, Betty was teaching, and finally in 1950 they settled in Lemoyne. Jack practiced dentistry, and after taking time to raise a family, she began teaching music again in the West Shore schools - Lower Allen Elementary, Rossmoyne, Washington Heights in 1968, and retired from teaching in 1986. Betty has always loved music and continued to sing in the Camp Hill Presbyterian Church choir for many years. She enjoyed playing piano for various local groups. She was actively involved as a Holy Spirit volunteer for many years, and was a member of the Lemoyne Civic Club, Camp Hill Women’s Club – Camp Hill Civic Club, and was also involved with various activities within her church. She is survived by daughter Linda Tocket and husband Donald of Mechanicsburg; daughter Marsha Leitzel and husband Craig of Mechanicsburg; son John E. O’Donnell, II, of Camp Hill; and two granddaughters, Kelly Tocket of Nashville, TN, and Kristi Tocket of Mechanicsburg. Betty was preceded in death by her husband, John Edward O’Donnell, I (Jack); her brother, Charles Isenberg; and her daughter Pamela Intreri. She was always so thankful for her health, strength and energy which enabled her to do the things that she so enjoyed through the years. She loved to read and practice music, and felt blessed in so many ways. Visitation will be held at 10:00 AM on Friday, January 5, 2017 at Musselman Funeral Home. A funeral service will begin at 11:00 AM with Pastor David A. Roquemore officiating. Burial will immediately follow at Rolling Green Cemetery. In lieu of flowers, contributions may be made to her church, Camp Hill Presbyterian Church, 101 N. 23rd St., Camp Hill, PA 17011 Musselman Funeral Home Is Honored To Serve The O’Donnell Family.

The family of Elizabeth "Betty" I. O'Donnell created this Life Tributes page to make it easy to share your memories.

Send flowers to the O'Donnell family.