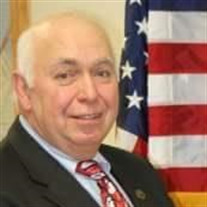 Elmer “Ed” Byrem, Jr., age 76, of Lemoyne, was called home on Wednesday, August 15, 2018 at Harrisburg Hospital as a result of Idiopathic Pulmonary Fibrosis. A son of the late Elmer and Emma (Kessler) Byrem Sigmon, he was born on September 22, 1941 in Mechanicsburg He was a graduate of West Shore High School, class of 1959 and a graduate of an online Culinary Arts program. He retired from Kessler’s, Inc. and in 2008 began a second career as a certified chef in the culinary department of Hershey Foods, where he worked for seven years. Additionally, Ed was able to share his passion for creating appetizing meals as the Executive Chef and Owner of My Cousin Ed’s Catering for several years. Ed loved sharing his culinary abilities at the Maryland State Fair and Ashcombe Garden Center, where he showed folks how to play with your food. He also participated in the Navy’s Adopt a Ship Program and was a member of the American Culinary Federation, Harrisburg Chapter PA 181, where he served as co-chairman of the Education Committee. Ed was heavily involved in service organizations his entire life; Boy Scouts, Harrisburg River Rescue, and a past president of the West Shore Lions Club. He was a member of the Lowther Manor Lodge #781, Harrisburg Forest No. 43, and an auxiliary member of Lower Allen VFW. Ed also served his country politically as the Mayor of Lemoyne for over 20 years, and as a Police Commissioner of the West Shore Regional Police Department. Ed was a member of Camp Hill Church of God, participating in the choir and the Come and See class. Ed loved the outdoors, often taking his family camping and hiking. He recently developed an interest in history through metal detecting and tracing his ancestry, as well as flying his drone. In addition to his parents, he was preceded in death by his sister, Dorothy Eichenberger. He is survived by his beloved wife of almost 56 years, Barbara (Moore) Byrem, daughters, Christine Stein (Adlai) of Galloway, Ohio and Cathy Byrem (Kim) of Vernonia, Oregon, and the light of life, granddaughter, Shannon Krumm of Galloway, Ohio and his sister, Marion “Jo-Ann Haubert and many nieces and nephews. A memorial service will be held at 10:00 AM on September 22, 2018 at Camp Hill Church of God with Pastor Jason Cooksey officiating. In lieu of flowers, donations can be made to the Camp Hill Church of God, 123 N. 21st Street, Camp Hill, PA 17011 for a new set of electric drums for the Praise Team. Musselman Funeral Home Is Honored To Serve The Byrem Family.

Elmer &#8220;Ed&#8221; Byrem, Jr., age 76, of Lemoyne, was called home on Wednesday, August 15, 2018 at Harrisburg Hospital as a result of Idiopathic Pulmonary Fibrosis. A son of the late Elmer and Emma (Kessler) Byrem Sigmon, he was born on... View Obituary & Service Information

The family of Elmer "Ed" Byrem Jr. created this Life Tributes page to make it easy to share your memories.

Send flowers to the Byrem family.