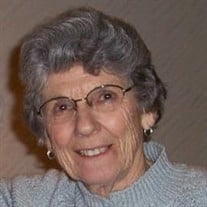 Esther Mae Wheeler, 90, passed away peacefully on Friday, February 17th at the Woods at Cedar Run in Camp Hill, after a long battle with Alzheimer’s.  She was born on January 10, 1927 in Lewistown, Pa., daughter of Lucy (Thomas) Harpster and Walter Harpster. She was preceded in death by her beloved husband, Howard “Plug” Wheeler and daughter, Lou Ann Reddel (husband, David Reddel) and siblings Arch Harpster, Glen Harpster, Max Harpster, Tom Harpster and Marian (Harpster) Treaster of Lewistown, Pa.  She is survived by a daughter, Cindy Way and husband, Andrew, of State College, five grandchildren and nine great grandchildren:  Kelsey Williams (husband, Danny and children Lucy, Wendy and Oliver) of State College, Loryn Way (Philadelphia) and Colby Way (State College); Drew Reddel (wife, Karen and children Devin, Ruby and Wyatt) of Fallston, Md. and Amy Smith (and children Carter, Levi and Jake) of Carlisle, as well as many nephews and nieces. Esther was well-known for her quick wit, and joyful zest for life which stayed with her until the end. She lifted the spirits of everyone who encountered her.  She was an avid golfer, enjoyed bowling, playing pinochle, fishing, gardening, singing and dancing and was an avid Phillies fan.  Esther was also an excellent cook, baker, and housekeeper. She and her husband were stationed in Ft. Knox, Germany and Colorado Springs before settling in Camp Hill upon his retirement from a career in the Army.  A devoted wife, she cared for her “Pluggy” in their home for several years before his death in 2000.  They especially enjoyed their many trips to visit his sisters: Cush Ogburn (husband, Jim) (Carrollton, Ky) and Donna Harmon (husband, Forrest) (Naples, Fla.) who preceded her in death.   She also enjoyed visits from her nephew, Larry Harpster, and wife, Linda, and sister-in-law Marg Harpster (Lewistown) as well as beloved niece, Sandra Berry and family (Port Royal, Ky). She and her husband were active members of the Mechanicsburg Church of the Brethren. Visitation will be held on Saturday, February 25 from 1-2pm followed by the service at the Mechanicsburg Church of the Brethren at 301 Gale St. Mechanicsburg, Pa.  A time of sharing and reception will follow at the Woods at Cedar Run at 824 Lisburn Rd., Camp Hill, Pa. In lieu of flowers, donations may be made to The Mechanicsburg Church of the Brethren Memorial Fund. Musselman Funeral Home Is Honored To Serve The Wheeler Family.

Esther Mae Wheeler, 90, passed away peacefully on Friday, February 17th at the Woods at Cedar Run in Camp Hill, after a long battle with Alzheimer&#8217;s.&#160; She was born on January 10, 1927 in Lewistown, Pa., daughter of Lucy (Thomas) Harpster... View Obituary & Service Information

The family of Esther Mae Wheeler created this Life Tributes page to make it easy to share your memories.

Send flowers to the Wheeler family.