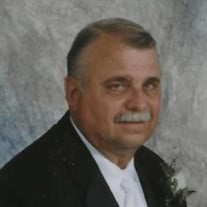 We lost a great man, Husband, Dad & grandfather “PaPa” on March 17, 2022 at the West Shore Hospital surrounded by his lovely wife, son, daughter and two grandchildren. Gene lost a battle with cirrhosis of the liver which caused him much suffering and multi organ failure. With Gene’s last act, he raised his head opened his eyes and told his family “I Love You”, he lowered his eyes and head and left us at 6:00 pm. He will be truly missed. Gene started his life with his parents Edgar Allen Bennett and Bertie Justice Skinner Bennett and his older brother Allen Edgar Bennett in a small western PA town known as Monaca. Gene was a hard worker and a good friend to many as he grew up. One lucky day at the age of 16 he met the love of his life Lorraine Samovoski at Sheffield Lanes Bowling Alley in Aliquippa, PA. They wed on April 17, 1971 with a candle light ceremony. As Gene and Lorraine’s love grew they added more love over their years and had three children Tracy (Bennett) McMurray married to Trevor McMurray, Timothy Bennett, and Todd Bennett. Gene enlisted in the Army National Guard in 1970 as a lineman working his way up to Sargent. After 6 years he decided to focus on his family and finished his tour of duty in 1976. Gene mostly worked in management throughout his life, from high school at K-Mart Automotive Center run by Uni-Royal, in Rochester, PA, then Murphy Mart Automotive in Moon Township PA. Then was transferred to Murphy Mart Automotive as a manager in Camp Hill, PA where the JC Penney’s store is currently. Then transferred to be a manager at Wimmer Tire in Lemoyne, PA. After that he was self employed and combined himself and his love in his business “Ben Sam”. He will always be known as the “Tire Guy”. Stacking trailer tires with the rims ten high on his F-150 Pickup Truck. Damn was he strong! As years pass, as they do, he remained the “Tire Guy” and continue working with tires for Highlands Tire in Carlisle, PA. Gene was no longer able to do the manual part of the tire industry, but still loved the road. Gene drove for years delivering Pizza, Newspapers, and prescription medication to Nursing homes in Pennsylvania and New Jersey. Gene was a passionate man and loved only a few things, such as his family, the road and the beach. He made sure to take his family on vacation to the beaches and other historical places every summer and throughout the years. Gene loved to swim out past where the waves break and would do a face down float. He was proceeded in death by his loving parents Edgar & Bertie Bennett and his brother Allen Bennett & his father-in-law & mother-in-law Rudy & Marge Samovoski. He is survived by his loving wife Lorraine G. (Samovoski) Bennett and his 3 children Tracy J. (Bennett) McMurray married to Trevor McMurray of New Cumberland PA, Timothy J. Bennett of Lemoyne PA & Todd J. Bennett & his fiancé Ashely Rodgers of Enola PA & Daughter-in-law Karra Hoover of Mechanicsburg, PA. He also has 9 grandchild Kiera, Hailey, Tyler, Cole, Lucas, Brady, Avin, Wyatt & Gabriel. Many cousins, nieces, nephews & great nieces and nephews and sisters-in-law, Jeanne Samovoski, Mary Catherine (Samovoski) Soltis, and brother-in-law, Mark Soltis. Service recording link: https://youtu.be/Ax55YJKrv4A

We lost a great man, Husband, Dad & grandfather &#8220;PaPa&#8221; on March 17, 2022 at the West Shore Hospital surrounded by his lovely wife, son, daughter and two grandchildren. Gene lost a battle with cirrhosis of the liver which caused... View Obituary & Service Information

The family of Eugene "Gene" N. Bennett created this Life Tributes page to make it easy to share your memories.

Send flowers to the Bennett family.