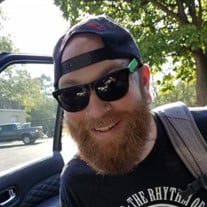 Fagan E. Quinn, 35, of Camp Hill, passed away on Thursday, October 14, 2021, at UPMC West Shore Hospital, after a fierce 10-month battle with Stage IV Melanoma. Born December 9, 1985 in Harrisburg, he was the son of the late Shawn E. Quinn and Jane M. (Horchler) Berzinec. He was a 2004 graduate of Cumberland Valley High School. A phenomenally talented artist, Fagan spent his career forging friendships and creating art on skin, most recently at Mermaid’s Mark Tattoo Parlor, Mechanicsburg. In addition to his mother, he is survived by his brother Teague Quinn of Shiremanstown, three uncles, Shea Quinn of Shiremanstown, Jim Horchler of Steelton, Joe Horchler of Camp Hill, three aunts, Kerri Steele and husband Irv of Landisville, Kelly Quinn Manning and husband Mike of Camp Hill, and Tammy Schreffler of Mechanicsburg, grandmothers, Loyetta Quinn of Camp Hill and Patricia Horchler of Lemoyne, and several very special cousins, James and Kelly Steele, Joanne Steele, Justin Steele, Piper Quinn, Sydney Manning, Sophie Manning, Erika Jackson, Laura Horchler, Greg Schreffler, Ashley Avila, and Andrew Horchler. In addition to his father, he was preceded in death by his grandfathers, William Quinn and Clement Horchler, and an uncle, Larry Horchler. Fagan was faced with much adversity in his 35 years. The loss of this father when he was just 9 years old, a life changing diagnosis of Type 1 Diabetes at 11 years old, and most recently his cancer diagnosis, and yet he remained a kind and genuine friend, a rare and beautiful soul, and an amazing human being. We have been overwhelmed by all the heartfelt sentiments shared by his many friends, fellow artists, and clients, all of whom he treasured. Fagan fought a very private battle with cancer that he didn’t intend to lose. He fought until the very end. He didn’t mean to go without saying goodbye. Friends and family are invited to Lovedraft’s Brewing Company, 165 Gateway Drive, Mechanicsburg, on Tuesday October 19th from 5:00PM until 8:00PM to gather, remember, and celebrate the life of one who left us too soon. Memorial contributions can be made to Char-Will German Shepherd Rescue, P.O. Box 132 New Ringgold, PA 17960.

Fagan E. Quinn, 35, of Camp Hill, passed away on Thursday, October 14, 2021, at UPMC West Shore Hospital, after a fierce 10-month battle with Stage IV Melanoma. Born December 9, 1985 in Harrisburg, he was the son of the late Shawn E. Quinn... View Obituary & Service Information

The family of Fagan E. Quinn created this Life Tributes page to make it easy to share your memories.

Send flowers to the Quinn family.