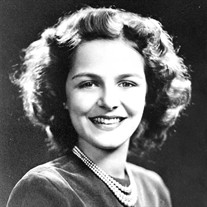 Gladys Mae (Laverty) Woodward, 96, of Camp Hill, PA passed away from her earthly home on March 19, 2020. She was born on November 21, 1923 in Enola, PA to Carrie (Fahnestock) Laverty and Jacob Milton Laverty. Gladys graduated from Enola High School in the class of 1941 and took part in several clubs, committees, and acting in the school plays. On December 29, 1943 Gladys married Marlin Earl Woodward, also from Enola. They shared 70 years together before she became a widow. Gladys was predeceased by her 2 brothers and 3 sisters: Leo Laverty, Jacob N. Laverty, Verna Zerbe, Freda Wentz, and Paulene Weigle. Through the years of her life, Gladys had a variety of jobs. The latest being the manager at Sears Roebuck for many years. She was a member of the Dauphin Dog Training Club and participated in obedience trials. After she retired, she became interested in dolls and the history of doll-making. She became a member of the Central Penn Doll Collector’s Club and the John Harris Doll Collector’s Club. Later, she became a member of the French Fashion Sewing Club. She loved her dolls, all her “doll people” friends, and going on road trips to conventions. The one thing she is remembered for are the little leather shoes she made for dolls. Gladys had many strengths and talents. She had a love of gardening, bird watching, arts and crafts, sewing, and traveling. She was at ease conducting programs, working on the committees, or organizing get-togethers. She often wrote poems to present information in humorous ways. Family was very important to Gladys. She is survived by her daughter, Lynne and husband Jack Klein, her son, Brian Woodward, six grandchildren, Kimberly and husband Ken Bixel, Brendan and wife Annie Woodward, Alyson and husband Bobby Jacobsen, Debbie and husband Brandon Stouffer, Christopher Klein, and Patrick and Alison Klein. Gladys also had 11 great-grandchildren, Evie and Emmett Bixel, Adriana, Fischer, and Valerie Woodward, Graham and Rowan Jacobsen, Finley and Lyla Stouffer, and Tessa and Hayden Klein. A celebration of Gladys’s life will be held at a later date.

The family of Gladys M. Woodward created this Life Tributes page to make it easy to share your memories.

Send flowers to the Woodward family.