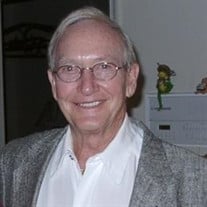 Glenn L Miller 89 of Lemoyne, Pennsylvania, passed away on September 20, 2017 at Bethany Village in Mechanicsburg. Funeral service and visitation will be held at Musselman’s Funeral Home, 324 Hummel Ave., Lemoyne on Tuesday, September 26, 2017 starting at 11:00 AM with graveside services immediately following at Rolling Green Cemetery. Glenn was born in Harrisburg, Pennsylvania to Ralph & Viola Cochlin Miller. He worked as a successful business man in Central Pennsylvania. Glenn owned and operated restaurants, meat & delicateness and the largest beer store in the region. He enjoyed flying airplanes, tennis, golf, running, billiards, cards and most of all his love of family. He was honorably discharged from the United States Merchant Marines. Along with many charities he was a member of The Camp Hill Masonic Lodge, The Elks Lodge, The Veterans of Foreign Wars, The American Legion, The Moose Lodge and The West Shore Chamber of Commerce. Glenn is survived by his wife, Betty Miller of Lemoyne, Son, Rodney Miller of Camp Hill, Daughter, Sherie Miller of Marysville, Daughter, Darlene Joynt of Camp Hill, Daughter, Luann Hendershot of Harrisburg and six grandchildren. He is preceded in death by his parents, three brothers Ralph Miller, David Miller and Lloyd Miller, Son Floyd and two Grand Children. In lieu of flowers, memorial donations may be made to The Lowther Manor Masonic Lodge #781, 105 Sylvan Street, Marysville, PA 17053. Glenn will remain in our hearts forever. Musselman Funeral Home Is Honored To Serve The Miller Family.

The family of Glenn L. Miller created this Life Tributes page to make it easy to share your memories.

Glenn L Miller 89 of Lemoyne, Pennsylvania, passed away on September...