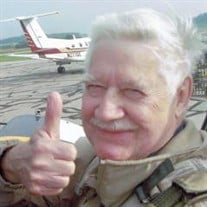 Harry Luther Bink, 89, passed away suddenly at his apartment Saturday, July 16, in Mechanicsburg's Bethany Village. Born Aug. 23, 1926, to Verna (Hill) and the Rev. Howard Frank Bink, He was happily married for 62 carnations (years) to the late Jean Bink. A graduate of Camp Hill High School and Pennsylvania State University, and a proud Theta Chi, he became a prominent registered architect in central PA with a 40-year career primarily with partners James Bogar, Kline Kuntz, and later with his son, Harrison F. Bink. He served as past president of the Central PA chapter of the American Institute of Architects, was a member of the Guild of Religious Architecture, and a member of the American Arbitration Association. A private pilot, he served in the Army Air Force at the end of WWII, and was a member of the American Legion and the Air Force Association. An accomplished watercolorist, he was a member of the Harrisburg Art Association, and a longtime member of Friendship Force, traveling and hosting worldwide visitors who then carried his painting gifts to five continents. He and his wife hosted lifetime friends, Binh Vo and Cuc Nguyen, who married at Jean and Harry's longtime residence in Lemoyne. He was a former 70-year member of Trinity Lutheran Church in Camp Hill, and a current member of Grace United Methodist Church in Lemoyne. He is survived by son Harrison, a local architect; daughters, Nancy and son-in-law Crawford Brown of North Salem, N.Y.; and Barbara, and son-in-law Michael Hill of Fairfax, Va; as well as three grandchildren: Conway Brown, and Jack and Charlotte Bink. He was preceded in death by his brother, Howard H. Bink, who shared his love of playing Big Band and swing music. A celebration of life ceremony will be at Bethany Village’s Community Room, Aug. 26, 2016, from 6pm to 8pm. In lieu of flowers, donations can be made to the Asbury Foundation, 325 Wesley Drive, Mechanicsburg, PA 17055, marked for the BV Care Assurance fund. The Community Room is at the same address. Musselman Funeral Home Is Honored To Serve The Bink Family.

Harry Luther Bink, 89, passed away suddenly at his apartment Saturday, July 16, in Mechanicsburg's Bethany Village. Born Aug. 23, 1926, to Verna (Hill) and the Rev. Howard Frank Bink, He was happily married for 62 carnations (years) to the late... View Obituary & Service Information

The family of Harry Luther Bink created this Life Tributes page to make it easy to share your memories.

Harry Luther Bink, 89, passed away suddenly at his apartment...

Send flowers to the Bink family.