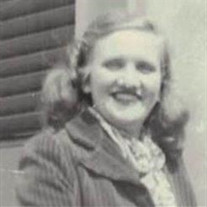 Isabelle L. Ellsperman, 89, of Harrisburg, went into the arms of God on Good Friday at Community General Osteopathic Hospital. A daughter of the late Isabelle Mae (Feger) and John Kyle Langham, she was born on August 20, 1927 in Philadelphia, PA. She graduated from West Philadelphia High School. Throughout her life she worked as a typist at North America Insurance Company in Philadelphia, a clerk for Curtis Publishing and for the Saturday Evening Post for Collier’s Magazine, and later in life, worked part-time at Wendy’s on Progress Avenue in Harrisburg, PA. She was a member of St. Margaret Mary Alacoque Church in Harrisburg. She was the widow of Joseph Ellsperman.  She always put the needs of her children or her family over any need of her own. She had a deep belief in God and she always wanted to do right. She will be missed by all that knew her. She is survived by her children; Eileen Vogt of Harrisburg, Laurence Ellsperman and wife, Rose of Dillsburg, and Kenneth Ellsperman and wife, Sharon of New Bloomfield, PA, a sister; Fleurette Hartley, a brother; Laurence Langham, grandchildren; Angelique McCain and husband, Jonathan of Tuxedo, NY, Verena Reigel and husband, Joel of Garners, PA, Nehemiah Ellsperman of Austin, TX, Christy Wenger and husband, Steve of Martinsburg, WV, and David Ellsperman of Dillsburg, and 2 great grandchildren; Paige and Ellie Wenger of Martinsburg, WV. A viewing will be held from 6 to 8 PM on Monday, April 24, 2017 at Musselman Funeral Home, Lemoyne, and again on Tuesday, April 25, 2017 from 9:30 to 10:30 AM. A Mass of Christian Burial will then be held at 11:00 AM on Tuesday, April 25, 2017 at St. Margaret Mary Alacoque Church, Harrisburg. Burial will immediately follow at Indiantown Gap National Cemetery. Flowers or contributions to Humane Society of Greater Harrisburg, 7790 Grayson Road, Harrisburg, PA 17111 or to Cumberland County Library System, 1601 Ritner Hwy #100, Carlisle, PA 17013. Musselman Funeral Home Is Honored To Serve The Ellsperman Family.

Isabelle L. Ellsperman, 89, of Harrisburg, went into the arms of God on Good Friday at Community General Osteopathic Hospital. A daughter of the late Isabelle Mae (Feger) and John Kyle Langham, she was born on August 20, 1927 in Philadelphia,... View Obituary & Service Information

The family of Isabelle L. Ellsperman created this Life Tributes page to make it easy to share your memories.

Isabelle L. Ellsperman, 89, of Harrisburg, went into the arms...

Send flowers to the Ellsperman family.