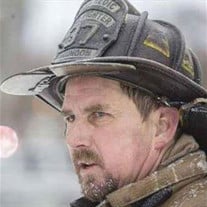 James “Jim” Grundon, 55, of Camp Hill, passed away unexpectedly at home on Sunday, July 15, 2018. A son of the late Albert Earl and Mary Elizabeth (Artner) Grundon, he was born in Harrisburg on July 2, 1963. He was a 1981 graduate of Cedar Cliff High School and a 1989 Paramedic graduate of Harrisburg Area Community College. He worked as a Paramedic with West Shore EMS from 1989-2015 and since then has worked with Community Life Team. He was a volunteer firefighter for the past 41 years beginning when he was 14 years old with Citizens of Lemoyne, now known as West Shore Bureau of Fire, as well as Wormleysburg Fire Department. He was formerly a member of Enola Emmanuel United Methodist Church. Jim enjoyed hunting, fishing, camping and cruising. He was a devoted father and doting grandfather, and loved his German Shepherd, Gunner. In addition to his parents, he was preceded in death by wife, Sue E. Grundon and brother, Michael Grundon. He is survived by his sons, James R. Grundon and his wife, Helen R. Grundon and grandkids, Michael J. and Ruby R. Grundon and Chad W. Grundon and his wife, Amanda A. Grundon, three sisters, Mary Hammond, Elizabeth Summers and Theresa Feidt and brother, Al Grundon, as well as his extended EMS and Fire Family. A visitation will be held from 12:00 to 2:00 PM at Mechanicsburg Brethren in Christ Church, 1050 South York Street, Mechanicsburg on Saturday, July 21, 2018. The memorial service will begin at 2:00 PM. In lieu of flowers, contributions can be made in one of two ways: 1.) Grundon Grandchildren 510 Herman Avenue Suite 3 Lemoyne, PA 17043 (Make checks payable to James R. Grundon. Money will be divided between Michael and Ruby) 2.) West Shore Bureau of Fire 510 Herman Avenue Suite 3 Lemoyne, PA 17043 Musselman Funeral Home Is Honored To Serve The Grundon Family.

The family of James "Jim" Grundon created this Life Tributes page to make it easy to share your memories.

Send flowers to the Grundon family.