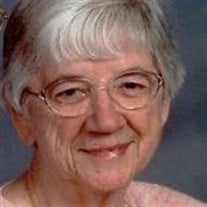 Janet Allen Davis, 90, formerly of New Cumberland and The Woods at Cedar Run died Thursday, August 4th at Messiah Village. Born October 6, 1925 to Henry M. (Harry) and Savilla C. (Holley) Allen in Harrisburg, PA. She was a graduate of New Cumberland High School class of 1942 and worked for the Bell Telephone Company. She was the devoted wife of George S. Davis for 61 years until his death in 2011. In addition to her parents she was proceeded in death by her brothers, Walter, Charles and David Allen and sisters, Esther Rorapaugh, Mildred Bruaw, Edna Kriner , Mary Bonn and Virginia Bowers. Janet was a lifelong member of St. Paul’s Lutheran Church in New Cumberland where she was very active and an alto in the church choir. She was a former volunteer for the Aurora Club and Harrisburg State Hospital. She was also very talented with the sewing machine and crochet needles and made countless items for her family and the less fortunate. Janet was an antique dealer and the owner of the former Old Road Antiques. She loved books and playing cards with her group of friends who had been together for more than 50 years. She and her sisters Mary and Ginger bowled as a team in local leagues. Janet also enjoyed time with her family and friends at their mountain retreat in Perry County. She considered her most important roles as wife and mother and her greatest joy was her grandchildren and greatgrandchildren. She is survived by her daughters Jeanette Bish (Curt) of Camp Hill, Audrey Neiswender (Karl) of Sunbury, Barb Musselman (Brian) of Camp Hill and Nancy Ambrose (Todd) of Lower Allen Township; eight grandchildren, Rob Kozicki (Beth), Brian Kozicki (Carisa), Lauren Wenner Bricker (Michael), Keegan Wenner (Stephanie), Andrew Musselman, Jillian Ambrose, Georgia Musselman and Jessica Ambrose; 6 great grandchildren, Rob, Trent, Tommy, Sullyvan, Aria and Teo and several nieces and nephews. All in all she was simply a nice lady and her family will miss her very much. Funeral Services will be held at her church, St. Paul’s Lutheran Church 530 Bridge Street, New Cumberland on Monday, August 8th at 11:00AM with a one hour viewing prior to the service beginning at 10:00AM. Burial will immediately follow at Rolling Green Cemetery. Memorial contributions can be made to her church. Musselman Funeral Home Is Honored To Serve The Davis Family.

The family of Janet Allen Davis created this Life Tributes page to make it easy to share your memories.

Janet Allen Davis, 90, formerly of New Cumberland and The Woods...