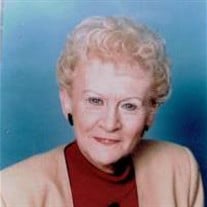 Jeanne A. Shearer, 90, a longtime resident of Wormleysburg, and also of Bradenton, Florida, passed away January 24, 2015. She was born on October 6, 1924 in Harrisburg, the daughter of Reuben and Carrie Hoover, and was a graduate of William Penn High School, the class of 1942. She was employed by the Commonwealth of Pennsylvania in her early years and later as a licensed real estate agent, and as a Manager of the former Hoover Plaza in Lemoyne. She also previously served as Tax Collector, Past President of the Civic Club, and a longtime member of St. Paul’s United Methodist Church in Wormleysburg. She was known as beloved Nana to her grandchildren and as Aunt Jeanne to her many nieces and nephews and will long be remembered for her voyages with them to the Jersey Shore and other regular destinations that they will cherish forever and for her many special food dishes and desserts. She dearly loved her son, granddaughters and great-grandchildren, gardens, dancing and pets. She is survived by her son, Don Paul Shearer, of Wormleysburg, two granddaughters, Terri Lee (Shearer) Trenchard and her husband, George Trenschard of Ellicott City, Maryland, and Kimber Lee (Shearer) Maier and her husband, Peter Maier of Tacoma Park, Maryland, four great grandchildren, Brady George and Katie Lee Trenchard, and River Paul and Eva Giselle Maier, and a brother, George C. Hoover and his wife, Erma of Camp Hill. She was predeceased by her brother, Vern A. Hoover, and his wife, Marie. She also was a good friend to many family dogs and cats that preceded her in death. Thanks go to her caregiver, Terry Yinger, who diligently and lovingly cared for her over the past 18 months, along with her certified nurse attendants at Compassionate Care Hospice. A memorial service will be held at a date to be announced. Musselman Funeral Home Is Honored To Serve The Shearer Family.

Jeanne A. Shearer, 90, a longtime resident of Wormleysburg, and also of Bradenton, Florida, passed away January 24, 2015. She was born on October 6, 1924 in Harrisburg, the daughter of Reuben and Carrie Hoover, and was a graduate of William... View Obituary & Service Information

The family of Jeanne A. Shearer created this Life Tributes page to make it easy to share your memories.

Jeanne A. Shearer, 90, a longtime resident of Wormleysburg, and...

Send flowers to the Shearer family.