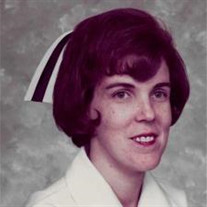 Joan Amelia Dickson (Beavers) Prediger, RN was born on June 10, 1941 to Alan and Amelia Dickson in Washington, D.C. She grew up in Forestville, Maryland, graduated from Suitland High School, received her Nursing Education at Sibley Hospital in Washington, D.C. She was married to Maurice Beavers in 1961, until his death in 1990. She gave birth to Jeffrey and then to Robert. She served a combined 44 years at Georgetown University and then Sibley Hospital. She met Walter David Prediger at a Psychology 101 class at Prince George's Community College where Joan received a degree in English and Psychology. They were married at a Picnic Wedding on July 4, 2008. It was catered by the famous "Spot" Restaurant. It took place in their yard looking down upon the beautiful Susquehanna River. She was very religious, belonging first to Trinity Episcopal Church in Forestville, and eventually joining Salem United Church of Christ in Harrisburg and then joining First Christian Church (Disciples of Christ) in Lemoyne, Pa. She certainly enjoyed living in Wormleysburg, Pa. for the past 9 years. Joan was a member of Easter Star Chapter 61, Centennial Lodge No. 174 in Upper Marlboro, Md. She also was a hospice volunteer with Heartland Hospice in Carlisle, Pa. She was also very fond of wearing hats to Church; you might say that hats were her trademark. In fact she was a member of the Red Hat Society. Her favorite passion was photography and she assembled dozens of photo-filled binders. She became a weaver of used plastic grocery bags, which were then made into plarn or yarn, and then crocheted into beautiful sleeping mats for the homeless. She also made handbags and pillows also. She was truly a helper to anyone who was in need. She was very proud of her two sons who became Prince George's County Firemen. Also, her granddaughter, Brandi who became a dental assistant, and her grandson, Joe who is still in high school. Her stepdaughter, Jennifer lives in Los Angeles, Ca. and is in the independent movie business. Joan liked dining out, Harrisburg baseball games, bird watching and was particularly fond of her cats, Licorice and Scuder. Her favorite musical was the "Phantom of the Opera" featuring soloist Michael Crawford and her favorite singer was Enya. When we left Maryland, she helped to donate a home for less fortunate known as "The House of David" which has sheltered many people. Since she moved here, we have met numerous friends who have graced us with their presence. She is survived by her husband, Walter David Prediger of Wormleysburg, Pa., brother and sister-in-law John and Sharon Dickson of Winchester, Va., son, Jeffrey and daughter-in-law, Elizabeth Beavers, son, Robert of Upper Marlboro, Md., two grandchildren, Brandi and Joseph in Upper Marlboro, Md, and daughter, Jennifer Prediger of Los Angeles, Ca. Joan was certainly a bright shining light in this troubled world. In lieu of flowers, if you wish, you may give a check to First Christian Church, (Disciples of Christ) Lemoyne Pennsylvania for Community Outreach Programs and it will be greatly appreciated. First Christian Church (Disciples of Christ) 442 Hummel Avenue Lemoyne, PA 17043 Saturday, April 2, 2016 Viewing at Church from 9:00 am to 10:45 am Funeral Service 11:00 Celebration Banquet in Church Fellowship Hall Joan will be interred a the Cheltenham Veteran's Cemetery in Cheltenham, Maryland at a later date Rest in Peace Precious Child, Sister, Mother, Wife, Nurse, Friend and Christian. Musselman Funeral Home Is Honored To Serve The Prediger Famiy.

The family of Joan Amelia Prediger created this Life Tributes page to make it easy to share your memories.

Send flowers to the Prediger family.