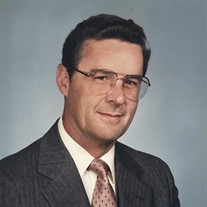 John Carter Anwyll, of Mechanicsburg, went home to be with his Lord and Saviour, on Wednesday, February 16, 2022 at Holy Spirit Hospital, surrounded by his dear ones. John was born February 18, 1937 at Harrisburg Hospital to William Ethelbert Anwyll and Jane Carter Atkins, who preceded him in death, as did his older brother, David C. Anwyll. John is survived by his wife of 64 years, Winifred Marie Anwyll née Trayer, and his sister Jane Rehrer née Anwyll. John was raised in Harrisburg, belonging to the Swatara High School Class of 1955 before finishing at Admiral Farragut Naval Academy. He went on to study Electronics at Elizabethtown College. John owned, managed, and expanded Pennsylvania Garages Inc. in the heart of downtown Harrisburg. For nearly a decade, John taught the Bible to men incarcerated in Camp Hill Prison. For his service, he was honored as Volunteer of the Year by the Governor of Pennsylvania. John preached abroad with India Gospel Outreach ministries. He travelled to Russia with his wife Winnie, where he preached and she sang the gospel to tens of thousands of Russian people in packed stadiums. In their home, John and Winnie held well-attended Bible studies for over 40 years. “For where two or three are gathered together in my name, there am I in the midst of them”, he often quoted, speaking of the resurrected Jesus Christ. John wielded his trusted King James Bible, “For the Word of God is quick, and powerful, and sharper than any twoedged sword, piercing even to the dividing asunder of soul and spirit, and of the joints and marrow, and is a discerner of the thoughts and intents of the heart.” (Hebrews 4:12) A profoundly humble, soft-spoken, and generous man, John nevertheless taught fiercely, and lived with equal boldness. He enjoyed interstate motorcycle touring, sailing, and playing chess deep into the night. He was an accomplished classical pianist, performing with the Harrisburg Piano Quartet. In his youth, John enjoyed riding his pony named Spot, and wrestling in high school, alongside his older brother, David. In his later years, John - known to his cherished grandchildren as “Papaw” - scouted flea markets for rusted-up kerosene student lamps, which he electrified and restored to their former Victorian Era brass glory in his workshop. Surviving, in addition to his wife Winnie, is his daughter, Nancy Helms née Anwyll, his son David E. Anwyll, 5 grandchildren and 4 great-grandchildren. Preceding him in death was his eldest son Jeffrey Anwyll. The funeral service will be held Saturday, February 26, 2022 at 11am at Emmanuel Baptist Church, Mechanicsburg. A viewing will be held the day before, on Friday, February 25, from 6pm to 8pm, and on the day of the funeral, from 10am to the beginning of services.

John Carter Anwyll, of Mechanicsburg, went home to be with his Lord and Saviour, on Wednesday, February 16, 2022 at Holy Spirit Hospital, surrounded by his dear ones. John was born February 18, 1937 at Harrisburg Hospital to William Ethelbert... View Obituary & Service Information

The family of John C. Anwyll created this Life Tributes page to make it easy to share your memories.

John Carter Anwyll, of Mechanicsburg, went home to be with his...

Send flowers to the Anwyll family.