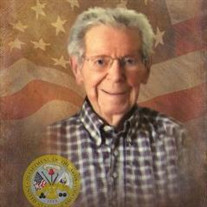 Jack Schelhas, 91, of Camp Hill, passed away peacefully on Saturday December 19, 2015 at Bethany Village, Mechanicsburg PA. He was born in Harrisburg on June 2, 1924 to the late Gertrude (Schwartz) and John Schelhas.Jack graduated from John Harris High School, and worked as a messenger for Western Union. He served in the United States Army in the China Burma India (CBI) Theater during World War II. He later worked for Esso, and then spent many years working for the Millers Mutual Fire Insurance Company covering the Eastern Shore of Maryland. He was active in Trinity Evangelical Lutheran Church of Camp Hill, serving on many committees. He was the scoutmaster for Boy Scout Troop 51; he was devoted to the Boy Scouts and continued to serve in other capacities as long as he was able. He was a long-time volunteer for the CONTACT Help Line in Harrisburg, often staffing the phones for the early morning shift. He was a leader in CBI veterans affairs in Central Pennsylvania. He was a long time member of the Masonic Lodge and the Zembo Shrine in Harrisburg. He is survived by his wife of 63 years, Jean Eater Schelhas; two children, his daughter Christine Schelhas-Miller and her husband R. James Miller of Ithaca, NY, and his son John W. Schelhas Jr. and his wife Susan Gwen Criswell of Athens, GA; and three grandchildren, Alexis Miller, Laura Miller, and Robinson Schelhas. In lieu of flowers the family requests donations be made to the Bethany Village Assurance Fund, 5225 Wilson Lane, Mechanicsburg, PA 17055. Musselman Funeral Home of Lemoyne has been entrusted with the arrangements. Visitation will be held at the West Education Center of Bethany Village West Campus, Maplewood Assisted Living (Door 21), 5225 Wilson Lane, Mechanicsburg on Saturday December 26 starting at 9:00 am, with the funeral service to follow beginning at 10 am. Burial will be private. Musselman Funeral Home Is Honored To Serve The Schelhas Family.

Jack Schelhas, 91, of Camp Hill, passed away peacefully on Saturday December 19, 2015 at Bethany Village, Mechanicsburg PA. He was born in Harrisburg on June 2, 1924 to the late Gertrude (Schwartz) and John Schelhas.Jack graduated from John... View Obituary & Service Information

The family of John W. Schelhas created this Life Tributes page to make it easy to share your memories.

Jack Schelhas, 91, of Camp Hill, passed away peacefully on Saturday...

Send flowers to the Schelhas family.