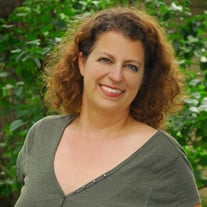 Julie Ann Wehnert, 46, of Lemoyne, PA, passed away peacefully after a courageous decision to undergo heart surgery to prolong her life on Thursday, April 5, 2018 at Penn State Health Milton S. Hershey Medical Center. She was born in Oregon, Ohio on December 16, 1971 to James and Sharron Shuler. Julie was an Attorney-at-Law in her partnership, Jividen & Wehnert, practicing family law as her passion. She was a graduate of Widener Law School in 2009 and also received her Bachelor of Science degree in Political Science from Ball State University in 1994. Earlier in her career she was a paralegal, having received her certification from the University of Toledo. Julie also worked in the travel industry and other professions after her undergraduate education. Julie led a passionate life and was a keen traveler having traveled to many parts of the US, including Hawaii, as well as Poland, Spain, the UK, Ireland, Mexico, Canada and throughout the Caribbean. She was an avid reader of all sorts of literature, and loved photography, her husband’s passion. Julie was happiest when she was on the sidelines of a soccer field with Tim, cheering on Paige, going on road trips, watching Tim compete in running races, or just attending a fall festival with food and activities. Julie is survived by her husband, Tim Wehnert, her daughter Paige Wehnert, her parents, James and Sharron Shuler, her brother Greg Shuler and his wife Mariola, her nephews Henry and Leo Shuler, and a special aunt, Gail Howell, as well as many aunts and uncles, cousins, nieces and nephews. A Celebration of Life Service will be held at Musselman Funeral Home, Lemoyne, PA, on Tuesday, April 10, 2018 at 3.00pm. Musselman Funeral Home Is Honored To Serve The Wehnert Family. The family has established the Julie Shuler Wehnert Memorial Fund. Checks can be made out to the Julie Shuler Wehnert Memorial Fund, Tim Wehnert or Sharron (Sherry) Shuler and mailed to 92 Hummel Avenue, Lemoyne, PA 17043.

The family of Julie Ann Wehnert created this Life Tributes page to make it easy to share your memories.

Send flowers to the Wehnert family.