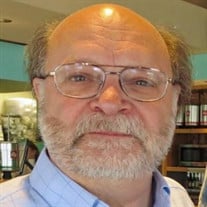 Keith James Franks passed away on Monday, September 6th in Camp Hill, PA. He was born June 2nd, 1950 in Reading, Pennsylvania to Kenneth Farrell Franks and Jean Martha (Broad) Franks. Keith graduated from Reading High School. From 1971-1975 he served in the United States Army and was honorably discharged at the rank of SP/5. He attended Albright College and Lowell Technological Institute. His future brother-in-law, who was a co-worker, and his future sister-in-law, introduced Keith to his future wife, Donna Munde, while working in Harrisburg, PA in 1979. They married in 1981 and celebrated their 40th anniversary in 2021. Keith began his professional career as an Applications Engineer for Intertel, Inc. He was the Founder and Principal of Qualcon Associates, Inc. The company specialized in WAN and LAN services to financial firms. He was a Senior Network Engineer for Citigroup, then a Senior Systems Engineer for Ixia\Net Optics, and finished his career as a Principal Consultant for Software Productivity Strategists. Keith had a sharp wit, a keen analytical mind and excelled at solving complex problems. He was faithful and loving to his family, enjoyed nature walks, nature photography, traveling, and keeping up on the news. He was pre-deceased by his parents and his older brother Kenneth (Bud) Franks. He is survived by his wife, Donna Munde of Camp Hill, PA, daughters Emily Franks (Scott Holcombe) of Hamilton, NJ and Kathryn Franks (Kenneth Zima) of Delran, NJ, 4 grandchildren, Celeste and Phoebe Holcombe and Kenny and Nicholas Zima with a fifth grandchild expected in February 2022, his brother William Franks (Elaine) of Maidencreek Township, PA, and a sister, Karen Dattoria (Vincent) of Frederick, Maryland. He also leaves brothers-in law and sisters-in-law, many nieces and nephews, and his mother-in-law, Barbara Munde of New Hartford, NY. A gathering to memorialize Keith will take place at St. David’s Episcopal Church, 90 Main Street, Cranbury, NJ at 11:00 on Saturday, September 25th. His ashes will rest in the church’s Memorial Garden. In lieu of flowers, please consider donating to Hospice of Central Pennsylvania, 1320 Linglestown Road, Harrisburg, PA 17110 or to Gift of Life, 800 Third Street, Harrisburg, PA 17102.

The family of Keith James Franks created this Life Tributes page to make it easy to share your memories.

Send flowers to the Franks family.