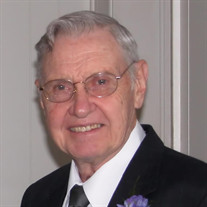 Kenneth A. Bulgrien, was the youngest son of Edward and Elsie M. (Vanderveer) Bulgrien. He was born July 14, 1928, at his parents’ residence in Sanilac County, Sandusky, Michigan. He went to be with Jesus at age 92 on Tuesday, July 6th, 2021. Ken grew up on the Bulgrien farm, Sheldon Road, Moore Township, Sandusky, Michigan, attended the Thomas Elementary School and graduated from Sandusky High School. After graduating and until 1952, he and his brother Alvin farmed the family farm. During four of those years, Ken attended winter Bible classes first at Messiah College, Grantham, Pennsylvania, and then at Niagara Christian College, Ontario, Canada. In 1952, Ken left the farm and went to work under the Superintendent of Buildings and Grounds at Messiah College, Grantham, Pennsylvania. During eight of the following ten years, he worked at the College, completed requirements for a teaching certificate and Bachelor of Arts degree in education, and took Bible training in preparation for missionary work in Africa under Brethren in Christ World Missions (BICWM). June 9,1962, Ken married his fiancée, Elva F. Lyons, originally from Midland County, Michigan, and recently returned from Africa after a term of missionary service under BICWM. In 1963, Ken was ordained for the ministry and filled that role as needed; however, he felt much more comfortable with a tool in his hand than behind a pulpit. He and his wife moved to Rhodesia (now Zimbabwe). From 1963 to1969, he provided equipment for and inspected rural schools in the Bulawayo and Pumula Districts. At Matopo and Pumula Missions, he did mechanical and maintenance work and a bit of farming. In 1970 Ken and his family moved to Zambia where he accepted assignment at Choma Secondary School, Zambia. There he supervised building and maintenance crews, did electrical work, and served as secretary to the school principal. In both countries, he worked behind the scenes thus freeing others to develop their leadership and administrative roles as BICWM transitioned from missionary to African/national leadership. Upon retiring from missionary service in 1978, Ken and his family acquired a rural home on Sheldon Road in Sanilac County, Sandusky, MI. For several years, he worked for Smith Implement Company in Sandusky and later for McNulty Electric Company in Lexington, MI. Dependable and efficient in his work, he retired several months after his 76th birthday. Ken’s service for God and his church, Mooretown Brethren in Christ, Sandusky, MI, continued to be in the areas of building, maintenance, and secretarial/treasury work. A quiet and humble man, he never sought for credit or acclaim but was active in his local church and continued to financially support the work of Brethren in Christ World Missions around the world. In 2019, in an effort to deal with age and declining health issues, Ken and his wife moved to Mechanicsburg, PA so as to be near family. It was there that he went to his eternal home. Preceding him in death were his parents, three sisters, Luella P. Kady, Erva M. Schlicht, and Arlene J. Marz, and three brothers, James E. Lester L. and Alvin L. Left to grieve his passing are his wife, Elva, and three sons: Kevin R. (wife Kim), Michael L. (wife Leta), and Dennis W. (wife Debra), six grandchildren, and numerous other relatives and friends. Committal Service and interment at Moore Township Cemetery, Snover, Michigan, Tuesday, July 13th following a 10:00 a.m. visitation and 11:00 a.m. funeral service at Mooretown Brethren in Christ church with previous church pastor, Ron Slabaugh, officiating. In lieu of flowers, please consider a memorial contribution to Mooretown Brethren in Christ Church (https://mooretownbic.com/give) or to Compassion International (https://www.compassion.com/donate.htm).

Kenneth A. Bulgrien, was the youngest son of Edward and Elsie M. (Vanderveer) Bulgrien. He was born July 14, 1928, at his parents&#8217; residence in Sanilac County, Sandusky, Michigan. He went to be with Jesus at age 92 on Tuesday, July 6th,... View Obituary & Service Information

The family of Kenneth A. Bulgrien created this Life Tributes page to make it easy to share your memories.

Kenneth A. Bulgrien, was the youngest son of Edward and Elsie...

Send flowers to the Bulgrien family.