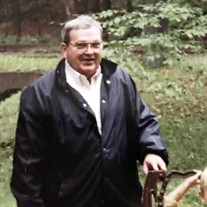 Kenneth E. Gaul, 90, a long-time resident of Reading, PA, passed away peacefully of natural causes at his daughter’s home in Mechanicsburg, PA. Kenny was born in Wyomissing, PA on April 22, 1930 to the late John Gaul and Beatrice (Weidner) Gaul. He was predeceased by his wife of over 50 years, Marrielgien (Flann) Gaul. After graduating from Reading High School, Kenny enlisted in the U.S. Navy, becoming a decorated sailor in the Korean War. After leaving the service, Kenny joined the Reading police force, where he worked for 24 years, first as a uniformed cop, then as a detective, and finally as a desk sergeant. After retiring as a policeman, he worked for ten years as a security guard for St. Joseph’s Hospital. Kenny enjoyed hunting and fishing. As a young man, he would take a bus from South 16th Street in Reading, carrying a shotgun, to the countryside to hunt. Kenny worked part-time hanging awnings for A.W. Brown and was invited to join Brownie’s deer camp in Clinton County. He made many life-long friends at that camp. Kenny owned various boats in his years, taking the family to Maryland, Delaware and New Jersey to fish and have fun. Eventually, he had a permanent campsite on the Chesapeake Bay alongside his brother John. Kenny is survived by his daughters Marcene Gaul, Kengien (Gaul) Yeager, wife of Scott Yeager, his son Forrest Gaul, husband of Dorothy Gaul, and his sister Barbara Jones. He is also survived by grandsons Ross Yeager and Luke Yeager and several nieces and nephews. He was predeceased by his brother John Gaul A graveside service will be held on June 3, 2020 at 11:00 AM at Forest Hills Cemetery in Reiffton, PA. In lieu of flowers, the family suggests donations be made to the hospice Homeland at Home, 2300 Barton Way, Suite 270, Harrisburg, PA 17110. The Musselman Funeral Home is Honored to Serve The Gaul Family. 324 Hummel Ave, Lemoyne, PA 17043.

Kenneth E. Gaul, 90, a long-time resident of Reading, PA, passed away peacefully of natural causes at his daughter&#8217;s home in Mechanicsburg, PA. Kenny was born in Wyomissing, PA on April 22, 1930 to the late John Gaul and Beatrice (Weidner)... View Obituary & Service Information

The family of Kenneth E. Gaul created this Life Tributes page to make it easy to share your memories.

Send flowers to the Gaul family.