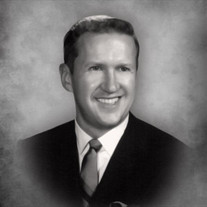 Dr. Kenneth W. Werley 89; of Camp Hill passed away on Sunday, November 18, 2018 at his home surrounded by his loving family. Kenneth was born on May 26, 1929 in Palmerton, PA and was a son to the late George L. and Blanche (Dilliard) Werley. He graduated from Stephen S. Palmer High School with the Class of 1947. He attended East Stroudsburg State University for one year and went on to attend Penn State University. In 2001 at his 50th class reunion, he was recognized as a Penn State Pioneer. A graduate of Temple University School of Dentistry and the University of Pennsylvania Graduate School of Medicine, where he received his certificate in Orthodontics. Ken spent 27 months in the U.S. Navy Dental Corp stationed at Newport, Rhode Island during the Korean Conflict. He opened a practice limited to Orthodontics in Camp Hill where he practiced from 1959-1994. He was the first dental specialist of any type, to have a full time practice on the West Shore. He was an avid golfer who had a single digit handicap at West Shore Country Club and was the medalist for the Championship Flight in 1969. He recorded 4 holes-in-one during his lifetime, two of which were at West Shore Country Club. He was an accomplished baseball player through his high school years and signed a baseball contract with the Philadelphia Phillies in 1947. He enjoyed coaching Camp Hill Little League and Teener Baseball Teams. He was a Penn State Football season ticket holder from 1962-2016 and was one of the early members of the Penn State Nittany Lion Club, joining in 1966. He was a past president of the Harrisburg Area Dental Society and also the Pennsylvania State Society of Orthodontists. He was a member of the Middle Atlantic Society of Orthodontists and a fellow of the Royal Society of Health; London, England. While attending Temple Dental School he was a member of the John F. Kolmer Medical Society and was the past president of the ETA chapter of Psi Omega Fraternity. He was a member of F&AM Lodge #388 and Trinity Lutheran Church, both of Camp Hill. Surviving are his wife of 50 years Marie M. (Stankowski) Werley, a son, Kenneth W. and wife Rebecca C. Werley of Camp Hill, a daughter, Kristine M. Werley and husband J. Alex Hartzler of Harrisburg, Grandchildren, Camden Werley, Levi Werley, and Julian Hartzler. Funeral Services will be held at 11 A.M. on Friday, November 30th at Trinity Lutheran Church 2000 Chestnut St. Camp Hill, PA. 17011. In lieu of flowers donation can be made to the American Cancer Society Rt 422 & Sipe Ave, Hershey, PA 17033. The Musselman Funeral Home and Cremation Services Is Honored To Serve The Werley Family. 324 Hummel Avenue Lemoyne, PA. 17043.

Dr. Kenneth W. Werley 89; of Camp Hill passed away on Sunday, November 18, 2018 at his home surrounded by his loving family. Kenneth was born on May 26, 1929 in Palmerton, PA and was a son to the late George L. and Blanche (Dilliard) Werley.... View Obituary & Service Information

The family of Dr. Kenneth W. Werley created this Life Tributes page to make it easy to share your memories.

Send flowers to the Werley family.