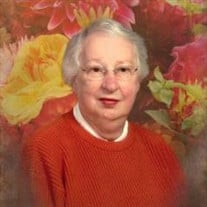 L. Patricia Wickenheiser, 90, of Camp Hill, passed away, Saturday, June 11, 2016 at Harrisburg Hospital. She was born on October 10, 1925 in Harrisburg, PA to the late Elizabeth (Kunkle) and Melvin Eshleman, and was lovingly raised by her aunt and uncle, Gertrude and Robert Himmelrich. Patricia was a 1943 graduate of the former Lemoyne High School, a 1944 graduate of Central Pennsylvania Business College, and was a legal secretary at the Law Offices of Sol Hurwitz in Harrisburg, PA. She was a member of the West Shore Baptist Church for 46 years, and was a regular participant in their Wednesday Morning Bible Study group. In high school, she was a member of the Red Cross Club during WWII. Additionally, Patricia was a Girl Scout leader, a member of Penn-Cumberland Garden Club, and Highland Women’s Club. She enjoyed playing cards and was an active member in several bridge and pinochle clubs within the area. She was an excellent cook and her hobbies included doing fine needlework such as crewel and cross-stitch. In addition to her birth parents and aunt and uncle, she was preceded in death by her husband, Elston L. Wickenheiser of 69 years, her brother, Robert Eshleman, and daughter-in-law Lee Ann Wickenheiser. Patricia is survived by a daughter; Judith (William) Rehkop, two sons; Thomas Wickenheiser and Brian (Lisa) Wickenheiser, grandchildren; Amanda Rehkop, William III (Janine) Rehkop, Ryan (Jody) Wickenheiser, Erin (Scott) Marshall-Duffy, Brienne, Aubrey, Kyle, Seth and Aaron Wickenheiser, and 6 great grandchildren. A viewing will be held at 9:30 AM on Tuesday, June 21, 2016 at West Shore Baptist Church, Camp Hill with funeral services beginning at 10:30 AM. Burial will immediately follow at Rolling Green Cemetery. In lieu of flowers, contributions can be made to her church. Musselman Funeral Home Is Honored To Serve The Wickenheiser Family.

L. Patricia Wickenheiser, 90, of Camp Hill, passed away, Saturday, June 11, 2016 at Harrisburg Hospital. She was born on October 10, 1925 in Harrisburg, PA to the late Elizabeth (Kunkle) and Melvin Eshleman, and was lovingly raised by her aunt... View Obituary & Service Information

The family of L. Patricia Wickenheiser created this Life Tributes page to make it easy to share your memories.

Send flowers to the Wickenheiser family.