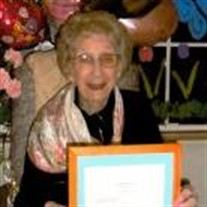 Madeline B. Balsbaugh, 102, of Lemoyne, passed away peacefully on September 16, 2015 at Manor Care. She was born on May 6, 1913 in Lemoyne to the late Charles and Edna (Kline) Naftzinger. She was a 1931 graduate of Lemoyne High School, a 1932 graduate of Central Penn Business School, a member of Penn-Cumberland Garden Club, Lemoyne Civic Club, Eastern Star and DAR and a life-time member of Trinity Evangelical Lutheran Church, Lemoyne. She and her husband, Jim owned an insurance agency for over 30 years and spent summers at their cottage in Pine Grove Furnace. Madeline enjoyed knitting and gardening and had won numerous awards for her floral arrangements. In addition to her parents, she is preceded in death by her first husband; Donald M. Buckbee, Sr., her second husband; James E. Balsbaugh, a son; Donald M. Buckbee, Jr., daughter; Anne L. Gumberg, brother; Charles W. Neftzinger, sister; Fances M. Garbacik and a grandson; Robert B. Buckbee, Jr. The family wishes to express their appreciation to Arcadia at Manor Care for the exceptional care they provided to their mother. Madeline is survived by son; Robert B. Buckbee, Sr. and wife, Shirley of Mechanicsburg, daughter; Marcia E. Haley and husband, James of Pittsburgh, 8 grandchildren and 13 great grandchildren. In lieu of flowers, contributions can be made to Trinity Evangelical Lutheran Church, 509 Hummel Ave, Lemoyne, PA 17043. A graveside service will be held at the convenience of the family. A memorial service will be held on Saturday, October 10, 2015 at Trinity Lutheran Church, Lemoyne.

The family of Madeline B. Balsbaugh created this Life Tributes page to make it easy to share your memories.

Madeline B. Balsbaugh, 102, of Lemoyne, passed away peacefully...

Send flowers to the Balsbaugh family.