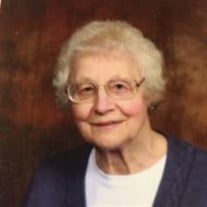 Margaret Christianson 1927-2016 Mechanicsburg – Margaret Elizabeth Ihrig Christianson, 88, of Messiah Village, formerly of Camp Hill, PA, died on Friday, May 6, 2016 at the Carolyn Croxton Slane Hospice Residence in Harrisburg. Born on June 4, 1927 in Hannibal, Missouri, to the late Elmer Earl Ihrig and Alice Kern Ihrig Triplett, she was also preceded in death by her husband of almost 59 years, David Gilbert Christianson in 2009 and her twin sister, Mary A. Withers of Wichita, Kansas on December 28, 2015. She grew up on a dairy farm, went to a one-room country school house through 8th grade, then graduated three times as co-valedictorian with her twin sister, Mary, from Hannibal High School, Hannibal LaGrange Junior College, and Shurtliff College in Alton Illinois with a major in English. She loved learning, singing & playing the piano, and loved her family and the church. She accepted Jesus Christ as her Savior at an early age. She married David in 1950, began their family in Rockford, Illinois, and then with 3 children, moved to Camp Hill, PA, in 1959. They became active members of West Shore Baptist Church, where she organized the church library, was church historian, a Sunday School teacher, member of many committees, and President of the women’s group. She was a member of a Harrisburg area Book Club for more than 40 years. She was a claims secretary in the 1970’s at Mowery Associates, and upon retirement, she & her husband David traveled extensively in the U.S. and overseas. After 50 years in Highland Park, they moved to Messiah Village in 2009, shortly before David’s death. She became a volunteer there and especially enjoyed the Pathways classes. Her greatest blessing was seeing her 3 children and all 10 grandchildren graduate from college, and then living to see 12 great-grandchildren be born. Margaret is survived by her sister, Ruth E. Foreman (G. W.) of Hannibal, Missouri, brother-in-law, Paul Christianson (Nancy) of Rockford, Illinois, sisters-in-law, Jenny Christianson of Rockford, Illinois, and Ruth Basony-Churchill (Bob) of Springfield, Illinois, one son, Alan D. Christianson, M.D. (Elaine) of Latrobe, PA, and two daughters, Karin R. Slate (Rick) of Gastonia, NC, and Jean M. Rhine (Doug) of Blooming Grove, PA, and many grandchildren, great-grandchildren, nieces and nephews. Visitation will be at Musselman Funeral Home in Lemoyne, on Monday, May 9th from 4-7 p.m. and on Tuesday, May 10th at West Shore Baptist Church, 2025 Market Street, Camp Hill, PA at 9:30am. A celebration of her life will follow with a Funeral Service then at 10:30am. A graveside service will follow immediately afterwards at Rolling Green Cemetery. In lieu of flowers, memorials may be made to either “Christianson Missions Scholarship Fund”, West Shore Baptist Church or to “Christianson Family Scholarship”, Alderson-Broaddus University, 101 College Hill Dr., Box 2154, Philippi, West Virginia 26416 or “Messiah Village Endowment Fund”, 100 Mr. Allen Dr., Mechanicsburg, PA 17055. Musselman Funeral Home Is Honored To Serve The Christianson Family.

The family of Margaret E. Christianson created this Life Tributes page to make it easy to share your memories.

Send flowers to the Christianson family.