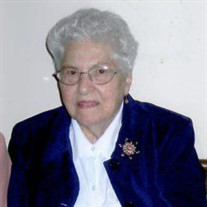 Margaret (Peg) M. Martin was born July 14, 1917 on a farm outside of New Cumberland, PA. She was the daughter of Mary Jane and Frank M. Williams. There were 4 boys and 3 girls; Paul R. Williams, Dorothy M., Mark L., Bruce S., Clara M., Earl K and Margaret M., all have passed away. Surviving are nieces; Kathalene Tomey and husband, Ronald of Lititz, PA, Wendy Boyd and husband, Bill of TN, Tracy Williams of Idaho, nephews; Frank Williams and wife, Florence of OR, Harvey Williams and wife, Joyce of Ohio, David Williams and his wife, Peg of Ohio, Robert Sidle and wife, Barbara of Bowmansdale, Richard Sidle and wife, Debra of Lebanon, and Raymond Sidle and wife, Betty of Lebanon, and several close friends at Masonic Village. She was a member of the Eastern Star and a member of Sell Memorial Chapel, at the Masonic Village, Elizabethtown. Margaret was married to Alfred L. Martin in 1936 in New Cumberland. Mr. Martin passed away in 1986. They had one son, Edward M. Martin in 1942. He passed away February 10, 2011. In lieu of flowers, contributions can be made to the Children’s Home at Masonic Village. A viewing will be held at 10:00 AM on Friday, July 1, 2016 at the Sell Memorial Chapel at Masonic Village, One Masonic Drive, Elizabethtown, PA. Funeral Services will begin at 11:00 AM with burial immediately following at Mt. Olivet Cemetery, New Cumberland. Musselman Funeral Home Is Honored To Serve The Martin Family.

The family of Margaret M. Martin created this Life Tributes page to make it easy to share your memories.

Send flowers to the Martin family.