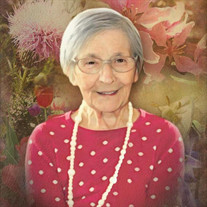 Meda P. Keys, 94, of Chapel Pointe Carlisle, passed away on November 15, 2020. Meda was born on July 15, 1926 in West Fairview, Pa. She was the daughter of the late Edgar F. Friese and Thelma (Walters) Friese. Meda had worked for the former... View Obituary & Service Information

The family of Meda P. Keys created this Life Tributes page to make it easy to share your memories.

Send flowers to the Keys family.