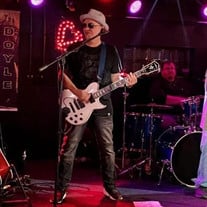 On September 4, 2021, we wiped salt from our eyes as Michael Thomas Ferguson’s native spirit rose from the earth to become a guide to his wildly intelligent daughters, Lily Blackbird (14) and Caitlin Sinclair (10) through the rest of their journey. Hailing from Detroit Michigan, Michael had a rock and roll soul blessed in a 20-year partnership with the love of his life, Emily Smith Ferguson (Hbg, PA) after meeting in the wilds of New York City. He closed his eyes while Emily held his gentle hand and Ziggy Stardust played his guitar. Michael quietly and passionately created music for most of his life. Having now joined Bowie and all legends who have passed before him, bandmates from Detroit to NYC feel the loss of a brother. Some of his bands, including Passion Nouveau, Skinhorse, Smear Campaign,Dubcrash, Identity Crisis and others have left their content etched throughout the internet, reminding us that we can, in fact, live on forever. Likewise, Michael’s talents will endlessly breathe life throughout the Midstate, New England, the Midwest, and beyond. His paintings on canvas and painstaking restoration to historic homes were approached with love and inspiration. Michael was humble in his genius, careful with his words, and always kind in his approach. His character is now potlighted in his children. Mikey’s encore performance came after a terminal cancer diagnosis in early 2020. Throughout the last year, he was able to live well through music, long and speedy car rides with Emily, naptime with pets and movies with his girls. A constant cup of Dunkin near his side. Rare were a complaint, nary a moment of defeat, Michael connected with friends and family near and far when he could, but mostly focused on his daughters, his living end, who he cherished deeply. Michael was an Eagle Scout and an altar server where he grew up in Detroit Michigan. The son of Thomas Ferguson and Violet “Mickey” Grundy Ferguson, both deceased, he was the younger brother to three sisters Juanita Labadie, Carol Thacker (deceased) and Deborah Ferguson who gifted him with numerous neices and nephews. When Michael became part of the Smith family, he grew as an uncle and promised his brotherhood to 4 sister-in-laws and 5 brother-in-laws. Several parent-in-laws also cherished his role in their extended family. A party will be thrown in the Harrisburg area to honor Michael early this fall. For more information, please reach out to the family member with whom you are most connected. All musicians are asked to bring their instrument of choice if they’d like to jam.

On September 4, 2021, we wiped salt from our eyes as Michael Thomas Ferguson&#8217;s native spirit rose from the earth to become a guide to his wildly intelligent daughters, Lily Blackbird (14) and Caitlin Sinclair (10) through the rest of their... View Obituary & Service Information

The family of Michael T. Ferguson created this Life Tributes page to make it easy to share your memories.

Send flowers to the Ferguson family.