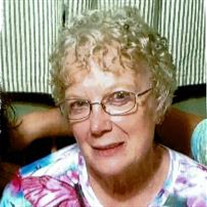 Nina June (Goudy) Davis, 74, went to live with the Lord on Tuesday, September 25th, 2018. She passed peacefully at home with her loving husband of almost 56 years. She was born at home in Paxtang, PA on April 17th, 1944 to Edna and Harold Goudy. She had two brothers, William R. Goudy and Glen R. Goudy, and two stepbrothers, Lauren Francis and Richard Monroe, who all preceded her in death, and two stepsisters, Marcia Sites, and Jane Schaeffer. June spent her childhood between her grandparent’s farm in Richmond, Vermont and her parent’s home in Camp Hill, PA. She graduated from East Pennsboro High School, and Central Penn Business School with a dual degree in Legal and Paralegal Secretarial. She started her career at Graff, Knupp, & Andrews and after 11 years she continued as Office Administrator for Johnson, Duffie, Stewart, & Weidner, from where she retired after 22 years of employment. June met the love of her life at the age of 16 while working at Bowman’s Department Store in Lemoyne. She and Bill married October 7, 1962 and had three adorable children. They lived in Spokane, Washington while Bill was in the Air Force, then June lived in Lemoyne/Summerdale with parents and in-laws while Bill was overseas. Upon his return, they lived in Lemoyne, then did a brief stint in Altoona while Bill worked for F. W. Woolworth. They moved back to New Cumberland, while Bill worked for W. T. Grant and then bought their forever home in Lemoyne. When the youngest child entered school, June pursued her degree and career. In addition to being a working mother, she was a cub scout den mother, a Sunday School teacher and Vacation Bible School teacher at First Christian Church of Lemoyne, a band booster, a faithful chauffeur, and cheerleader to all her children’s and grandchildren’s endeavors. On becoming an empty nester, she became involved in New Cumberland’s Civic Club, tutored ESL learners through the Cumberland County Library System, and furthered her personal ministry by investing her time with Daybreak’s Care Ministry and Prayer Team. She volunteered her time and servitude to Lykens Valley Camp Meeting and produced their newsletters for many years, as well as spending time serving at King’s Kids Camp. In recent years, June and Bill enjoyed traveling, cruising, and spending time together at their cabin. She lived a life full of grace, gentleness, compassion, service, and love forthe Lord and his children. She was a loving wife, mother, daughter, sister, grandmother, great grandmother, and friend to many. She is survived by her husband William M. Davis Jr., her children, June M. Shepherd of Elizabethtown, William S. Davis of Seven Valleys, and Julie L. Janney of New Cumberland, and their respective spouses Darin Shepherd, Tammy Davis, and Brian Maher, and her seven grandchildren, Nicholas H. Janney (his spouse Alexandra), Skylar R. Janney, Joshua S. Davis, Hannah J. Davis, Grace E. Davis, Dylan S. Shepherd, and Davis S. Shepherd, and her pride and joy, her great grandson Kole A. Janney. Also surviving is her sister-in-law Therese M. Goudy and brother-in-law and spouse Neil and Nancy Davis and their children. She will be greatly missed by all, but we are rejoicing in the knowledge that she is with her Lord and Savior, Jesus Christ, and we know one day we will be reunited. The family will greet friends at the viewing from 5pm to 7pm at Musselman Funeral Home located at 324 Hummel Avenue Lemoyne, PA on Monday, October 1st, 2018, to be followed by a funeral service. In lieu of flowers, donations may be made in the name of N. June Davis to The ALS Association Greater Philadelphia Chapter to 321 Norristown Road - Suite 260, Ambler, PA 19002. “The butterfly is nature’s way of reminding us that there is hope in grief. When the caterpillar is no more, the butterfly exists in ultimate Freedom and Beauty.”

Nina June (Goudy) Davis, 74, went to live with the Lord on Tuesday, September 25th, 2018. She passed peacefully at home with her loving husband of almost 56 years. She was born at home in Paxtang, PA on April 17th, 1944 to Edna and Harold Goudy.... View Obituary & Service Information

The family of N. June Goudy Davis created this Life Tributes page to make it easy to share your memories.

Nina June (Goudy) Davis, 74, went to live with the Lord on Tuesday,
September...