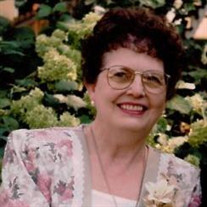 Nancy E. Miller, 88, formerly of Lemoyne, died on Wednesday, September 7, 2016, at the Church of God Home, Carlisle. Born on January 26, 1928, in Lemoyne, she was the daughter of the late Emory H. and Jessie R. (Haas) Trayer.  Nancy was a 1945 graduate of the Lemoyne High School. She also attended the Thompson Business Institute of Harrisburg. She was a secretary for L.B. Smith, Inc. in Camp Hill and Rogele, Inc. in Harrisburg. She was reared in the Church of Christ, Disciples, in Lemoyne, and was an active member of Trinity United Methodist Church in New Cumberland during her adult life. She was a member of the Administrative Council, Staff-Parish Relations Committee, Mission Committee and Education Committee of that congregation. She served as one of the lay delegates from Trinity Church to the Central Pennsylvania Conference of the United Methodist Church. She was a Sunday School teacher for over 50 years and sang in the Chancel Choir of Trinity Church, often performing as a soloist or in small groups. She was also very active in the United Methodist Women, serving as the president of her local unit, the New Cumberland District, and the Central Pennsylvania Conference. She participated in the World Methodist Conference in Nairobi, Kenya in 1986.  She was on the board of Church Women United in Central Pennsylvania and the Neighborhood Center in Harrisburg. She was also an active member of the Lemoyne Junior and Senior Civic Clubs, participating in many of their musical and theatrical presentations. She is survived by her husband of 69 years, Robert K. Miller, Sr. of the Church of God Home, Carlisle, sons Rodney K. and his wife Elizabeth, of Hampden Township, and Randal K. and his wife, Laurie, of Ardmore, Pennsylvania, grandchildren Allison of Hampden Township, Jonathan of Ardmore, and Emory of Raleigh, North Carolina, and great-grandchildren Cecelia and Emory Michael of Raleigh. She is also survived by two sisters; Mrs. Madeline Miller, of New Cumberland, and Mrs. Winifred Anywll, of Mechanicsburg, and one brother, Daniel Trayer, of Greenbackville, Virginia. She was preceded in death by her son, Robert Jr., daughter-in-law, Mary Susan, and a brother, Walter Trayer. A viewing will be held at the Musselman Funeral Home, Hummel Avenue, Lemoyne from 6:00 PM until 8:00 PM on Tuesday, September 13th. There will also be a viewing from 10:30 AM until 11:30 AM on Wednesday, September 14th at the Trinity United Methodist Church, 410 Bridge Street, New Cumberland. The funeral service will follow at 11:30 AM at the church. Following interment at the Mt. Olivet Cemetery, New Cumberland, there will be a luncheon served at Trinity Church. Memorial contributions may be made to the Trinity United Methodist Church, New Cumberland, or to the Church of God Home, Carlisle. Musselman Funeral Home Is Honored To Serve The Miller Family.

The family of Nancy E. Miller created this Life Tributes page to make it easy to share your memories.