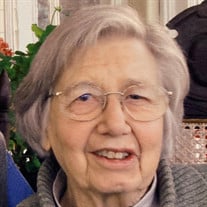 Patricia B. Cameron died Tuesday, March 1, 2022, at Homeland Center, Harrisburg. She was the widow of architect Duryea Cameron, AlA. They had been married for 65 years at the time of his death. Pat was born in Newport, Rhode Island on June 27,1925, the daughter of Rear Admiral William W. Behrens, Sr., USN, and Nell V. Behrens. Pat was predeceased by her brother, Vice Admiral William W. Behrens, Jr., USN, and by one of his sons, her nephew. Growing up in a Navy family and moving frequently, Pat attended many schools. She graduated from both Punahou School in Hawaii and from Friends Select School in Philadelphia, because her time in Honolulu was interrupted on December 7, 1941, when she was present during the attack on Pearl Harbor. Following the attack, she and her mother travelled to San Francisco aboard the S.S. President Coolidge, part of the first convoy of ships to reach San Francisco. She graduated from Bryn Mawr College, where she served as President of the Undergraduate Association. Married to Duryea at St Stephen's Episcopal Cathedral on June 18, 1948, she was active in the life of the Cathedral for many years. She was its first female Senior Warden, and was the founding Head of St. Stephen's Episcopal School, for which she was honored by the National Association of Episcopal Schools. Pat was active in the life of the Episcopal Diocese of Central Pennsylvania, as well, serving on both its Standing Committee and its Incorporated Trustees. She was an Honorary Canon of the Episcopal Church, and received various awards for her service to the Church and the community. Duryea and Pat Cameron were Charter Members of the Historic Harrisburg Association. Pat also enjoyed memberships in the College Club of Harrisburg and the Junior League. She is survived by her four children, Anne (Thomas Mullender), Alexander, Sr. (Kelly), James (Cynthia), and William (Kelli), She is survived also by seven grandchildren, four great grandchildren, two nephews, three nieces and several godchildren. A service will be held at St. Stephen's Episcopal Cathedral at 11:00 a.m. on March 26, 2022, with visitation beginning at 10:00 a.m. A reception will follow the service. Those wishing to make memorial gifts are encouraged to consider donating to St. Stephen's Episcopal Cathedral or to The Patricia B. Cameron Scholarship Fund for St. Stephen's Episcopal School, a fund of the Foundation for Enhancing Communities.

Patricia B. Cameron died Tuesday, March 1, 2022, at Homeland Center, Harrisburg. She was the widow of architect Duryea Cameron, AlA. They had been married for 65 years at the time of his death. Pat was born in Newport, Rhode Island on June... View Obituary & Service Information

The family of Patricia B. Cameron created this Life Tributes page to make it easy to share your memories.

Send flowers to the Cameron family.