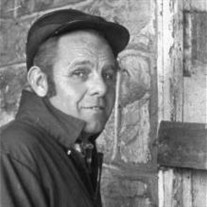 Paul “Bill” Wise, of Mechanicsburg, passed away Monday, February 27, 2017 with his family by his side. A son of the late Bruce E. and Carrie E. Wise, he was born in York County on November 4, 1928. Bill was preceded in death by his wife of 64 years, Shirley “Dot” (Eichelberger) Wise. He was also preceded in death by 3 brothers and 6 sisters, a grandson; Connor Wise and a great-granddaughter; Rebecca Hower. Bill is survived by five children; Linda Sunday (Steve), Patricia Hower, Michael Wise, Dennis Wise and Jeffrey Wise, all of Mechanicsburg. He was Pop-Pop to nine grandchildren and five great grandchildren. Bill was a farmer and a family man. When asked about his occupation, he would say he was “outstanding in his field.” A viewing will be held at 10:00 AM on Saturday, March 4, 2017 at Musselman Funeral Home, Lemoyne. Funeral services will begin at 11:00 AM with burial immediately following at Rolling Green Cemetery, Camp Hill. In lieu of flowers, contributions can be made to Heartland Hospice Memorial Fund, 333 Summit St., P.O. Box 10086, Toledo, OH 43699-0086 or the American Lung Association, 3001 Gettysburg Rd, Camp Hill, PA 17011. Musselman Funeral Home Is Honored To Serve The Wise Family.

The family of Paul "Bill" Wise created this Life Tributes page to make it easy to share your memories.

Send flowers to the Wise family.