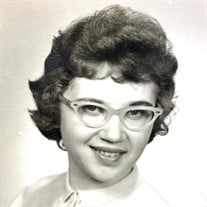 Ramah Lois (Strausser) Fulton passed peacefully Monday, April 13, 2020 at her home, surrounded by loved ones and friends. Born on May 25, 1937 in Sheridan, Pennsylvania to William and Ruth M. (Levengood) Strausser. She was preceded in death by John L. Fulton, her husband of 49 years; her father William; her mother Ruth; her Step-father Richard J. Wagner; and her sister Faith E. Kline. She is survived by two sons - John W. (Judy) Fulton of Highlands Ranch, CO and Richard M. Fulton of Camp Hill, PA; two grandchildren – JP (Callie) Fulton of Matthews, NC and 1st Lt Ryan (Grace) Fulton of Dayton, OH; two great grandchildren Thompson and Evelyn Fulton of Matthews, NC; niece Camela Krzeszewski of Brick Town, NJ; nephew Joseph J. (Sharon) Wilberscheid IV of Toms River, NJ; niece Debbie (Tony) Vitale of Macomb, MI; and niece Karen Peters of St Clair Shores, MI. Ramah was raised in Kleinfeltersville, Pennsylvania, was a 4-H Member, and graduated from Schaefferstown High School in 1955. Ramah was an accomplished musician and played a variety of instruments including the piano, accordion, and marimba. She later attended the Central Pennsylvania School of Business and was an employee of the PA State Liquor Control Board until her retirement. Ramah met her husband, John, at The Spot in downtown Harrisburg and married at the Hershey Rose Gardens. Ramah was a dedicated and loving mother first and foremost. She treasured her sons John and Richard, and her “daughters” Judy, Callie, and Grace. She especially loved her role as the beloved Nanny to her two grandchildren – JP and Ryan, but the icing on her beautiful cake of life were her two great grandchildren Thompson John and Evelyn Jean. Ramah had a vivacious personality and always made people around her laugh and feel comfortable. She made friends everywhere she went, had a notorious sweet tooth, and was an amazing cook and baker known for her famous beef BBQ, PA Dutch potpie, and flakey delicious pies that she shared with neighbors. She was a snappy dresser and had an endearing desire to help those in need. She cherished her son Rick who was her lifeline in her later years; took great pride in her grandchildren, JP who played Men’s Soccer at Messiah College, and Ryan who graduated from the U.S. Air Force Academy; her 2 great grandchildren who called her Nanny; and was very fond of her Jack Russell terrier, JR. Ramah always looked forward to her daily phone calls with Judy, Cammie, KK and with her dear friends and family Bonnie, Christine, Ellie, Loretta, Marcia, Mary, and Naomi. A Celebration of Life will be held this summer with the date and location to be determined. The family thanks Compassus Hospice for their care. Memorial contributions in Ramah’s memory may be made to the Helen O. Krause Animal Foundation, Inc., PO Box 311, Mechanicsburg, PA 17055-0311; http://www.helenkrause.org/support-our-cause/donate. The Musselman Funeral Home is Honored to Serve The Fulton Family. 324 Hummel Avenue, Lemoyne, PA 17043.

Ramah Lois (Strausser) Fulton passed peacefully Monday, April 13, 2020 at her home, surrounded by loved ones and friends. Born on May 25, 1937 in Sheridan, Pennsylvania to William and Ruth M. (Levengood) Strausser. She was preceded in death... View Obituary & Service Information

The family of Ramah L. Fulton created this Life Tributes page to make it easy to share your memories.

Send flowers to the Fulton family.